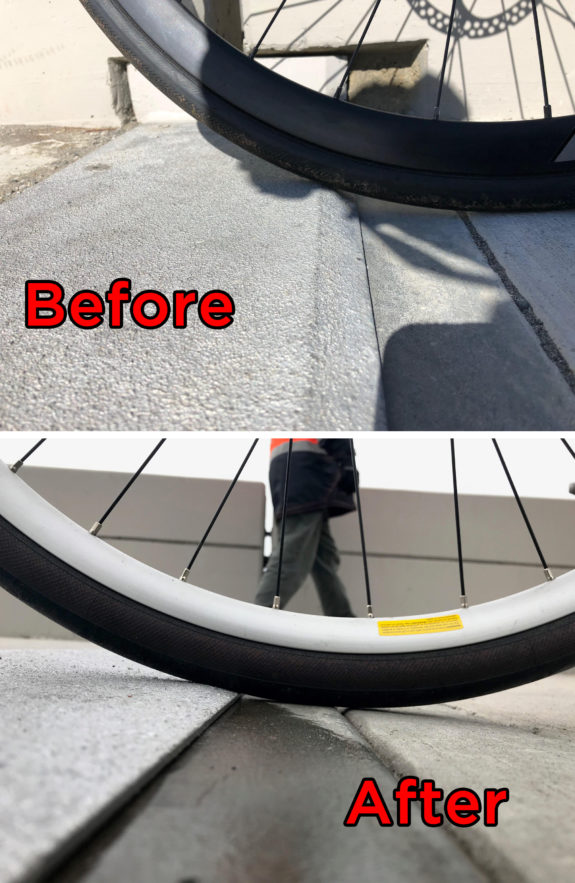 The trail on the 520 Bridge is amazing, except for one annoying and possibly dangerous detail: The metal plates that cover the floating bridge’s expansion gaps are jarringly bumpy. It’s a frustrating detail in what is otherwise a wonderful experience (well, as wonderful as being next to a freeway can be).

Well, great news! WSDOT installed a demonstration gap cover yesterday to test a design that is hopefully less jarring and meets all their engineering criteria (the plates need to handle heavy loads in case the trail is used for maintenance vehicles). It is located near the east end of the bridge, and WSDOT is hoping to gather feedback from folks about whether it addresses the issue. Text (206) 200-9484 to submit feedback.

You can also post to social media using the hashtag #RateThePlate.

We noted these bumps before the bridge opened and argued that the state should smooth them out so they are not so jarring. When biking, you hit a bump every few seconds. This is annoying, for sure, and diminished the otherwise pleasant experience of biking across Lake Washington. But my main concern is that someone will not be expecting such a bump on a brand new trail and will crash.

I have not yet heard any reports of crashes caused by these gap covers, which is a good thing. But it is still worth fixing the issue to be sure.

From the photos, it certainly appears to be a much less jarring bump, though Seattle Bike Blog has not yet had a chance to try it out. Have you biked across the 520 Bridge since the new plate was installed? Let us know your thoughts in the comments below.

State Route 520’s new trail across Lake Washington has garnered high praise from more than 300,000 users since its December 2017 opening. Bike riders, runners, dog walkers and folks out for a relaxing stroll tell us they’re delighted to have a new, foot-powered trail with scenic lake and mountain views. And many pedal-pushing commuters say the new trail, as an alternative to I-90’s cross-lake connection, is cutting significant time off their daily treks between the Eastside and Seattle.

There’s one aspect of the path that’s not getting rave reviews: the narrow steel plates covering the trail’s expansion joints on the bridge. Some bike riders tell us the plates are jolting, especially for road bikes with skinny, highly inflated tires. I’ve ridden the trail myself, several times, and experienced the thump of each joint cover.

I’m glad to report that we’re working on a remedy. Our engineers developed and installed a prototype plate designed to ease the bumps cyclists experience while crossing the floating bridge. The new cover plate design won’t completely eliminate the bumps – but it should produce a marked improvement.

We’ll solicit feedback through the end of the year. If we hear that the plate provides a better ride, we’ll manufacture and install replacements for all 27 existing narrow cover plates.

Why the path has cover plates
The roadway on the new, 1.5-mile-long floating bridge has expansion joints on each end of the 23 massive, concrete pontoons supporting the structure. The joints allow the bridge to expand (or contract) horizontally as air and water temperatures change. They also allow the bridge to flex vertically as the lake’s water level rises or falls. On the shared-use trail, there’s an open gap at each joint that varies in width from about 2 to 4 inches. Left exposed, a gap of that size could be hazardous to someone with a cane, a skateboarder, or other trail users. So we added cover plates over each joint to address the safety risk that open gaps would pose.

The trail’s existing steel cover plates are a half-inch thick, with a flat top, beveled edges and a rough, nonskid surface. When designing the bridge, we used federal guidelines to ensure the plates’ compliance with the Americans with Disabilities Act.

The plates also play a role in the integrity of the bridge itself. The roadway and shared-use path are elevated 20 feet or more above the lake’s surface. This design feature keeps vehicles, bike riders and pedestrians wave-free during windstorms. It also gives our crews ample room for inspection and maintenance of the pontoons below.

Because the bridge deck is elevated – up to 70 feet on the east high-rise near Medina – we use a special truck, equipped with an extendable, hinged arm and crew basket, for inspecting the underside of the bridge. This 3-ton vehicle travels along the trail for these inspections, so the cover plates must be strong enough to support its weight. Moreover, emergency vehicles, including fire trucks, might have to use the trail if a major incident blocked the roadway.

A tale of two trails
A few bicyclists have asked us why the older, narrower shared-use trail on the I-90 floating bridge is smoother than the new SR 520 Trail – without the expansion-joint bumps. The answer, once again, relates to SR 520’s elevated roadway.

In the same way traffic moved on the old SR 520 floating bridge, all I-90 traffic crossing Lake Washington – including bicycles – travels directly on the pontoons’ concrete surface. That means there are no heavy trucks making under-bridge inspections from I-90’s shared-use path – and no need for sturdy cover plates on that path’s expansion joints.

The new SR 520 Trail is a wonderful addition to the region’s expanding network of trails, and we want your experience of riding the trail to be fabulous as well. Be sure to #RateThePlate after your next ride! 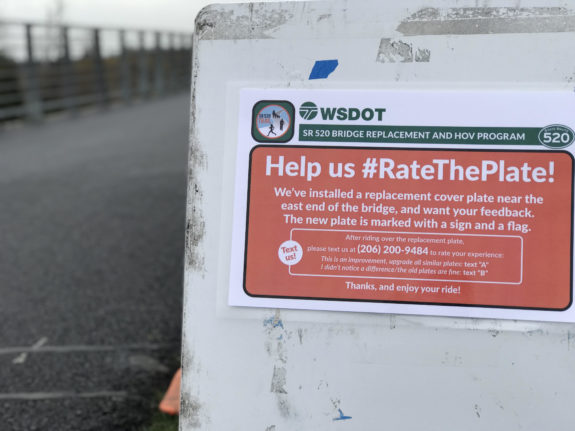 This entry was posted in news and tagged 520 trail, wsdot. Bookmark the permalink.