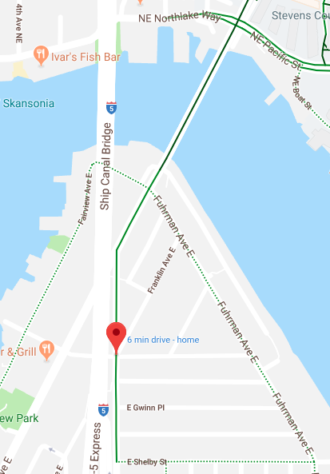 Approximate location of the hit and run, via Google Maps.

Did you see or stop to help a man injured while biking on Harvard Ave E at E Allison St Friday morning around 9 a.m.? Ariel and his wife Roï are trying to get in touch with the people who helped him and may have seen the person driving, who fled the scene.

Ariel is recovering from serious injuries to his shoulder, ribs and lungs. Several people on bikes stopped and stayed with him until help arrived. Roï reached out to Seattle Bike Blog to help get the word out. If you are one of those who stopped, please email [email protected] and I will forward your email to them.

My husband, Ariel, is a regular bike rider and uses his bikes for his day to day commute. [Friday] around 9am he was hit by a car – it was a hit and run…Ariel was riding downhill on Harvard Ave E towards University Bridge (alongside the I-5 to Ariel’s left), and the car was coming uphill in the opposite direction, and has taken a turn left at Harvard Ave E and E Allison St (which is where it ran over Ariel).

Ariel is hospitalized in Harborview and suffers shoulder and ribs fractures, and pneumothorax injury.

When Ariel was hit, a group of bicyclists was there and they talked to him to make sure he’s OK and stayed until help arrived. Some of them took pictures – we are hoping they captured the car that hit Ariel, because the driver stayed at the scene for a minute or two before he took off – while the bicyclists were already there. I was wondering if perhaps there’s a way to reach out to bicyclists who were there to contact us? Any help is appreciated!