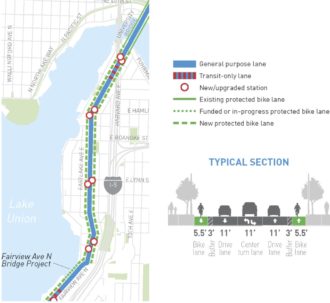 From a project presentation.

There may be no bike project north of downtown Seattle more important than Eastlake Ave. Connecting to the University Bridge today and the 520 Trail in the future, Eastlake is an already well-used bike route with huge promise for growth. The problem is that today, biking on the street is very stressful because there are no bike lanes.

But SDOT’s Roosevelt RapidRide project has the potential to transform the street into the multimodal neighborhood commercial street it should be, prioritizing walking, biking and transit. And plans, developed over years of study, public outreach and dedicated people-powered advocacy, have included protected bike lanes on Eastlake Ave because they are vital to achieving that vision and connecting the citywide bike network.

But due to pushback from folks worried about losing on-street parking, the city went back to the drawing board this year to take another, deeper look at every option they could think of to see if there was any way to create a quality bike route through the area that provides access to Eastlake destinations and a direct route between the University Bridge and South Lake Union. And that effort only further supported what we already knew: Building protected bike lanes on Eastlake Ave is by far the best option.

So in a project update email this week, the team announced that the bike lanes are staying in the plans.

To everyone who volunteered their time and energy to go to public meetings, send supportive comments or otherwise organize to support these bike lanes, good work! We’re still bit away from construction, but this feels like a significant step closer to a quality bike route east of Lake Union.

Thank you to everyone who joined the October 23 Eastlake neighborhood briefing for the RapidRide Roosevelt project! Approximately 100 interested community members joined us to learn more about the planned protected bike lane and potential tools to manage parking in the future.

You can view the presentation shared at the meeting. You can also review the RapidRide Roosevelt’s bicycle facility evaluation and the draft parking and curbspace management analysis.

Why is there a protected bike lane planned for Eastlake Ave E?

Along with improving transit service between Roosevelt and Downtown Seattle, the purpose and need for the RapidRide Roosevelt also includes improving safety conditions and connections to RapidRide stations for people biking and walking along the corridor.

While bicyclists and pedestrians only make up 6.3% of all crashes, they represent a much larger percentage of serious (47.4%) and fatal (39.7%) crashes. In addition, the University Bridge has the second-highest recorded bicycle volume in the city. The RapidRide Roosevelt project includes approximately 3 miles of protected bike lanes (PBL) connecting Roosevelt, the University District, Eastlake, and South Lake Union neighborhoods.

In Eastlake, the protected bike lane is planned to be built in both directions along Eastlake Ave E. This bike lane is included to meet the project’s purpose and need by improving safety and access to transit, as well as contributing to improved transit speed and reliability in the corridor.

Other bicycle facility options for this area have been evaluated, but the protected bike lane on Eastlake best meets evaluation criteria.

What are the impacts to parking along Eastlake Ave E?

In order to meet the project goals and to install the protected bike lane, the project would remove on-street parking and vehicle load zones on Eastlake Ave E. Loading zones would be replaced near the removed loading zones where feasible.

SDOT will continue to work with the Eastlake neighborhood to develop parking strategies to better utilize remaining curbspace capacity.

Who approved this project? When was the decision made?

The Seattle City Council adopted the project’s Locally Preferred Alternative in 2017. That’s the approval to proceed with the project as currently defined, which includes the protected bike lanes.

The next milestone is the environmental assessment process and preliminary design. We are coordinating with the Federal Transit Administration on our environmental process.

This entry was posted in news and tagged eastlake, sdot. Bookmark the permalink.