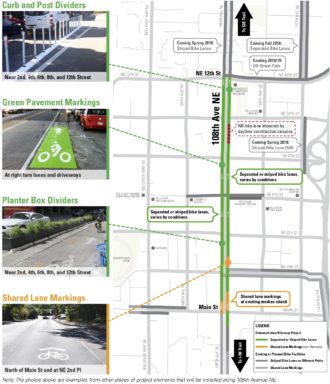 Bellevue wants to know what you think of their demonstration bike lanes on 108th Ave NE, so take their online survey and let them know.

The city opened the new bike lanes this summer as a practical test of the concept through the heart of the downtown core. The lanes connect to the transit center and were accompanied by the launch of Lime e-bikes, which allow more people to use the new lanes.

They aren’t perfect, but the relatively low-budget lanes are a test of the concept that the city’s transportation planners say they will continue to improve depending on how things are working. So let them know!

From the City of Bellevue:

The City of Bellevue wants to hear from you!

The 108th Avenue Demonstration Bikeway opened on July 31, 2018, providing the first continuous bicycle facility throughdowntown Bellevue. Now the City of Bellevue wants to hear what you think. If you bike, walk, bus, or drive along 108th Avenue NE in downtown, please take a few minutes to respond to an online questionnaire at https://www.surveymonkey.com/r/108thBikeDemo. The survey is available until Nov. 1, 2018.

Your response will help the city transportation staff know what you think works, what doesn’t, and how the design can be improved to better serve all users. More information is available on the project webpage. Thank you for sharing your thoughts about the demonstration bikeway.