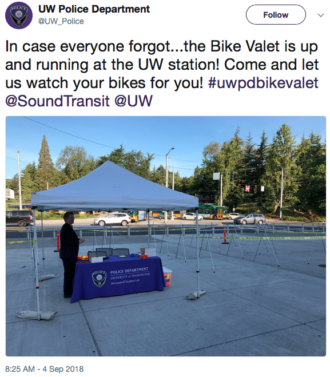 The UW Police Department is trialing the idea of a free bike valet service at UW Station this week in an attempt to help fight bike theft and get more bikes registered on the free bicycle database Bike Index. You do not need to be a UW student or staff to participate.

The valet will be staffed 7 a.m. to 5 p.m. Tuesday through Thursday this week only, and they will have computers ready to help you register your bike online if you have not done so already.

There is only space in the pilot service for 100 bikes, so you may need to get there early to take advantage of the service. They’ll be set up just north of the station in front of Husky Stadium.

UW Station’s location just off the Burke-Gilman Trail has made it a major bike-to-transit connection. Bike racks filled up immediately after opening as people from all over northeast and north-central Seattle realized that biking to the train is the easiest and often fastest way to get around. Sound Transit has since added more bike parking to help with the crunch, but the station could be a good place for something a bit more organized. UW already offers a bike valet service to handle the influx of bikes during home games at Husky Stadium.

Bike Index is a non-profit, nationwide database of bikes. It’s primary use is to serve as a one-stop shop for locating stolen bike listings. But very often, people have no record of their bike’s serial number and other identifying information. So Bike Index encourages people to register their bikes now. Then, if it is unfortunately stolen later, the details are all recorded and ready for you to post them quickly. The quicker a listing is posted and the more accurate its details, the more likely you are to get your bike back if police, a bike shop or a helpful community member finds it.

More details from the event page:

The University of Washington Police Department will be holding a trial Bike Valet event during the days of September 4-6, 2018. The times of the Bike Valet will be 7am-5pm.

A UW Police Officer will be paired with one or more civilian volunteers to park and watch over bikes in bike valet equipment provided by UW Transportation Services.

The Bike Valet will be located just north of the UW Sound Transit Station near Husky Stadium. Space is limited to 100 bikes so come early and take advantage of this great opportunity to interact with your campus police department!

Participants MUST be registered in Bike Index at http://bikeindex.org.

Staff working the event will be able to do on the spot registrations but we highly recommend interested individuals register beforehand to cut down on waiting times.