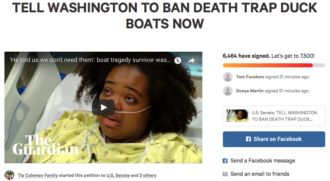 Tia Coleman lost her husband, their three kids and five more family members July 19th when a Ride the Ducks tour boat sank in a Branson, Missouri, storm. In all, 17 people on the Duck have died. The scale of her loss is unimaginable.

Now she is calling on the Federal government to ban the amphibious vehicles nationwide if they can’t be designed to be safe, something that should have happened long before July 19, 2018. You can sign her petition online.

But why were Duck boats still operating anywhere in our nation after one killed five people and injured a shocking 69 others in a single 2015 collision on the Aurora Bridge? The carnage total of that one Seattle collision was so overwhelming that it made up a full quarter of all traffic deaths on city-operated streets that entire year (does not include state-run I-5).

How did we not ban them immediately back in 2015? We should have. The Duck that killed Coleman’s family should not have been operating this summer. We cannot make that mistake again.

Senator Claire McCaskill (D-Missouri) has introduced Senate Bill 3301, which would ban amphibious tour vehicles that can’t meet more stringent safety guidelines, like having a back-up way of staying buoyant in case of flooding so that they don’t sink like a rock to the bottom with a vehicle full of trapped passengers. The bill mostly focuses on water safety, with road safety requirements notably absent. Perhaps those are amendments Washington Senators Patty Murray and Maria Cantwell could add.

Ride the Ducks Seattle, which shares branding and basic vehicle design with the Branson operation but is a separate company, said in a statement that their vehicles do meet the requirements outlined in the proposed bill except for elements they say may conflict with Coast Guard requirements:

At Ride the Ducks Seattle, we support any measures that will make amphibious tour boats safer. We applaud the intent of this bill, and we already have the vast majority of recommendations in place at our operation. Where there are any deviations from the proposal, it’s because we strictly adhere to the safety requirements and recommendations of the United States Coast Guard.

Our vessels absolutely meet all current United States Coast Guard (USCG) requirements for buoyancy, including watertight compartmentalization. Our understanding is that some of the bill’s other proposals conflict with current USCG regulations, which will need to be resolved if the bill passes. Regardless, we will continue to follow safety regulations stipulated by USCG.

But these reclaimed military DUKW amphibious vehicles have proven tragically unsafe on both our waterways and our roads. The one in Branson did not have back-up flotation for when it started taking on water, which is an obvious need that Ride the Ducks Seattle claims to already have. But the vehicles also have long, high-up front ends with no crumple zone. So when they collide on land, the front end both blocks the driver’s view of people walking or riding small vehicles and acts as a devastating weapon against big vehicles. When the Duck collided with that charter bus on the Aurora Bridge, the long and high front end cut straight through the side of the bus and mangled the bodies of its occupants. The axle may have caused the collision, but the front end design is why the casualty toll was so high.

Image from the NTSB report shows how the Duck’s front end tore into the bus (PDF).

Malfunctions and mistakes can happen with any vehicle or by any operator. Safe design, whether it’s a street or a product, does everything it can to minimize or eliminate harm when things do go wrong. But when things go wrong with Duck vehicles, whether on land or water, they go extremely and horrifically wrong. That’s the definition of unsafe design.

Seattle and Branson are far from the only tragedies these tour boats have caused (reading the Duck tour Wikipedia page is truly horrifying):

That’s at least 43 people killed and many more than that with serious and lifelong injuries. No novelty tourism experience is worth this much carnage and this many mass casualty events.

Ride the Ducks can still operate land and sea tours by driving road-ready vehicles on land and transferring to water-ready vessels for water. Sure, that might cramp their style, but so what? They should have voluntarily shut down their amphibious tours after the 2015 tragedy like their Philadelphia counterparts. But they didn’t, so now government needs to make the decision for them.

Every time I see a Duck go by (or desperately try to stay far enough ahead of them on the Fremont Bridge approaches to make sure they can see me over their huge front ends), I am shocked they are still running. It’s a regular reminder of how we failed as a society to curtail even the most obvious road safety danger.

Below is Coleman’s plea from her petition to ban the Ducks nationwide:

The duck boat took my family from me.

On July 19th, my husband, Glenn, 40, and our babies Arya, 1, Evan, 7, and Reece, 9, drowned in a totally preventable disaster on Table Rock Lake in Branson, Missouri. Altogether, seventeen souls, including my other Coleman family members – Horace “Butch” Coleman, 70, Belinda “Toni” Coleman, 69, Ervin “Uncle Ray” Coleman, 76, Angiee Coleman, 45 and her baby, Maxwell 2, were killed.. They all died because of the duck boat’s deadly design, which the industry knew about for more than 16 years. In 2002, the National Transportation Safety Board told the duck boat operators to make them safe.

I miraculously survived, along with my 13-year-old nephew, Donovan.  So many loved ones died that tragic day, but not my spirit. In their memory, I am asking you to join me to help ensure that no one else is killed by death trap duck boats.

Help us ban all unsafe amphibious vehicles like the one that killed my family and dozens more over the past 20 years.  In addition to signing this petition, it’s also important to support Senate Bill 3301 Duck Boat Bill that will force the reckless and deceitful duck boat industry to comply with safety recommendations that it has ignored for decades. Ban the duck boats NOW!

Thank you from the bottom of my heart.

This entry was posted in news and tagged ride the ducks, tia coleman. Bookmark the permalink.