Aviva Stephens | Bikes are for boys: Cycling while woman

EDITOR’S NOTE: Aviva Stephens is a Seattle native and financial professional who discovered the benefits and joys of cycling on her challenging work commute between Ballard and the Eastside. She just launched a new blog called Biking In the Rain, which is also on Instagram at @bikingintherain. Find more of her writing on Medium and follow her on Instagram at @avivarachelle.

As a young girl I rode my bike everywhere around town, to the corner store for my daily candy stash, through the lovely wooded areas around Seattle, and the beaches along Lake Washington. But once I hit my tweens I became consumed with the tidiness of my apparel, containing my offensive odor, and maintaining a cool facade that included no outwardly appearance of effort or trying. While the boys remained boys, I was being groomed by society to be a young lady for the remainder of my school days and into my professional career as a tax accountant. As I proceeded to pursue my life ambitions the bike of my childhood gathered dust in the garage, and those moments of joy slowly faded from memory.

In finding my way to bike commuting, I was faced with the unexpected challenge of having to hunt down where I fit in the bike community as a woman. In every facet of my experience — from shopping for bikes to finding folks to ride with to procuring bike apparel — there are countless implications that bikes are for boys. The majority of bike shops are full of boy employees, group rides are led by the boys from the bike shop, and the readily available apparel seems to only fit athletic boy like bodies.

I use the word boy rather than man because there is a certain child playfulness with cycling so boy seems more fitting. While navigating my way to bike commuting is much more challenging than purchasing a car at my local dealership, the benefits are enormous, including health, sanity, and most importantly finding my childlike spirit at least once during my work day.

As a marginalized minority, I’ve grown accustomed to confused glances and microaggressive questions when I repeatedly defy stereotypes in my day-to-day life, but I was shocked to find this same friction present on my journey to bike commuting. While there’s no sign over the bike shop that says “boys only,” it’s the little things that send the “boys only” message loud and clear.  Just the other day my coworker took a glance at my sick-ass All-City road bike and asked “is that is girls bike,” then shoots me a confused glance that implied “because bikes for boys.”

Everywhere along my journey there are these little “boys only” signs that create a boys’ club mentality in the bike community.  Here’s a few that I’ve observed:

In navigating my way through the bike misogyny, I was lucky enough to encounter some badass cycling divas that gave me some great advice that enabled me to overcome these hurdles. Just being the presence of women in the bike community was super encouraging because it allowed me to envision myself on a bike.  It may sound simple, but we all need role models to inspire us.

Second, when I set out to purchase a bike, my friend Martina from Swift Industries (Editor’s Note: Swift is a longtime Seattle Bike Blog sponsor) told me, “Forget about bike reviews, websites, or what anyone else thinks, just go to all of the bike shops and ride as many bikes as you can until you find the bike that fits.” And that’s what I did. Bike shopping can be overwhelming, but just being in the bike shops, talking about what I want and learning everything I could is what catapulted me into the bike community.

Ultimately I purchased my All-City from Counterbalance, but it was only after a conversation I had with the folks at Free Range Cycles that led me there. I also learned my way around a bike from a reasonably-priced bike class offered at the Montlake Bicycle Shop.

Finally, there are great bike groups such as Black Girls Do Bike, Cascade Bicycle Club, and Friends on Bikes that have helped me along the way.

While there is an emerging support system for newbies to cycling coming from the margins, the social stigma of cycling while woman is still pervasive and continues to be a challenge every day I ride.

Is that a woman?…on a bike!

A few years ago I took an Eat, Pray, Love type excursion to France, my version was more like Drink, Eat, Shop. For the Drink portion of my journey, I rented a mountain bike in the Burgundy Valley and pedaled through the vineyards along a country road, popping into wineries along the way. The illustration below is from my trip, does it look like rolling hills of grapevines? 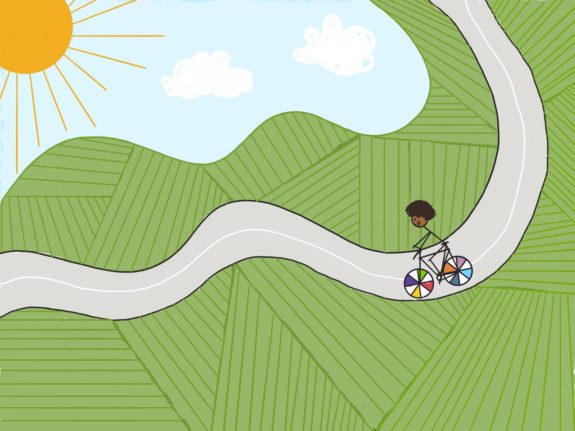 I feel this image completely sums up the experience of cycling while woman because of a comment that a cheery English woman said to me during dinner after my ride. As I was taking my first sip of silky white burgundy, this woman walked up to me and curiously stated that had she had spotted me on my bike earlier that day and gleefully inquired to her husband “Is that a woman?…On a bike!” The combination of her shock, confusion, envy, joy, and proper English accent seemed to encompass the collective reaction to women in cycling.

While planning this trip I had often fantasized about how romantic it would be to glide effortlessly through the grapevines while encountering handsome French wine makers. However, I was surprised at how much Burgundy, France, resembled Yakima, Washington, and my butt was killing after riding a cheap road bike over questionable country roads under the hot sun. At the end of the day I was covered in dirt and sweat, but fortunately I was able to take a hot shower and get gussied up before my eloquently French dining experience.

This juxtaposition of my picturesque ride through wine country and the reality of my sore buns and sweaty dirty skin as a result is the same conundrum that I face with bike commuting everyday. While there are several aspects of bike commuting that are unwelcoming to women, I think the largest hurdle to get over is sweat. First, women don’t sweat…but we do, so confusing. I’m not saying that women don’t sweat ever, but it is not socially acceptable for woman to sweat in open spaces (unless you’re jogging) which is evidenced by the hordes of women squirreling away in yoga studios, Orange Fitness, Barre classes, SoulCycle, and the corners of the women’s only section of the gym.

While I have yet to change the minds and hearts of American society that will allow women to sweat out loud, I have discovered a few tricks that have helped me overcome this unrealistic sweat-less standard for my daily commute.

Get dressed at work? No thanks! This is a nightmare for woman because of the plethora of toiletries that are required to for a woman to face day. Should a woman decide to go the get-dressed-at-work rout for her daily commute she must choose to either set up a second dressing room at the office or tote it back and forth on the bike. Again, no thanks! Despite the mental weight of having to maintain a mobile dressing room, my apparel and tidiness are my amore to face the long days of unwanted advances, constant critique, and doubtful glances of my skills and abilities.

Since I don’t subscribe to the get-dressed-at-work program, I search high and low for apparel that can withstand ten or so miles on the daily ride. While I am a tax professional, I am fortunate to work at a technology company where I can wear jeans and tee shirts in the office. However, I still don’t want to arrive to my morning meetings in a sweaty tee, so let’s address this sweat issue head on.

No matter what your style there are a few things you can look for at your favorite shops that will get you from bike to conference room.

I wrote this post because anytime I’m on my bike or talk about riding, I get questions from women on how I accomplished the task. I’ve heard several stories about how people used to ride bikes as girls, or in college, or before they got married, pregnant, or moved cities. So ladies, let’s ride! If you used to ride and miss the joys or if you’ve thought of riding but don’t know how, feel free to ask me questions and share your stories in the comments🚴🏾‍♀️

36 Responses to Aviva Stephens | Bikes are for boys: Cycling while woman