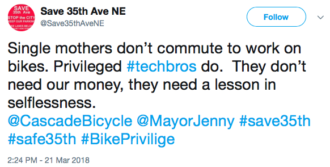 A twitter handle representing the “Save 35th Ave NE” group fighting against city plans for safer crosswalks and bike lanes posted a sexist tweet the other day saying that “single mothers don’t commute to work on bikes.” It backfired spectacularly when the many biking moms in Seattle pointed out that they do, in fact, exist. Many of them are 35th Ave NE neighbors.

The tweet goes on to bafflingly suggest that only “privileged #techbros” bike, which is perhaps a wonderful insight into the minds of at least some of the people fighting these bike lanes. This poster has no idea who bikes, so they created some “other” group of people that they feel they don’t need to care about and bunched all people who bike together into that group. It’s just #techbros! Who cares if they die?

What’s depressing — beyond the blatant retrograde sexism, of course —is that this poster has lost sight of the fact that it’s their own neighbors who are trying to get around by bike. If your neighborhood organization relies on pretending that many of your neighbors don’t exist, then something has gone terribly wrong with your organization. The problem is right there in the name: “Save” 35th. Save it from what? Being a safe and comfortable place for people to bike? Just because you or your friends don’t bike doesn’t mean your neighbors who do bike are not worth caring about. That’s practically the definition of being selfish.

Bike lanes on 35th Ave NE would make make it safer and easier for more people of all ages, gender identities and income levels to get around without a car. More people biking is good for traffic, good for business, good for the environment and good for people’s health. In other words, it’s good for neighborhoods.

As of press time, that tweet has been up for 48 hours without any sort of clarification or retraction from the Save 35th group.

Below is just a taste of the responses people have posted so far. I hope that 35th Ave neighbors fighting the bike lanes take a step back and question some of their assumptions about who bikes and why these bike lanes might actually be good for their neighborhood. Read the tweet at the top of this post again and ask yourself whether that really represents the values you have for your neighborhood. 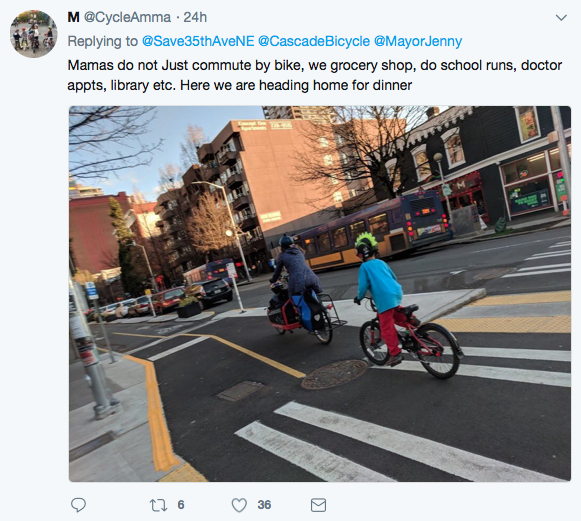 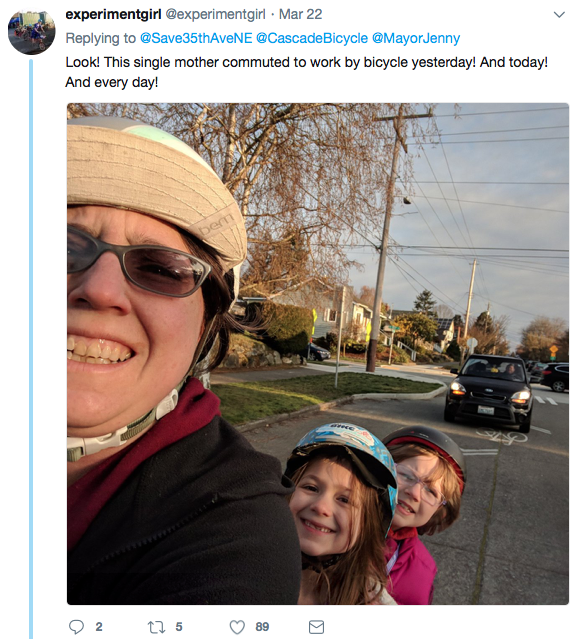 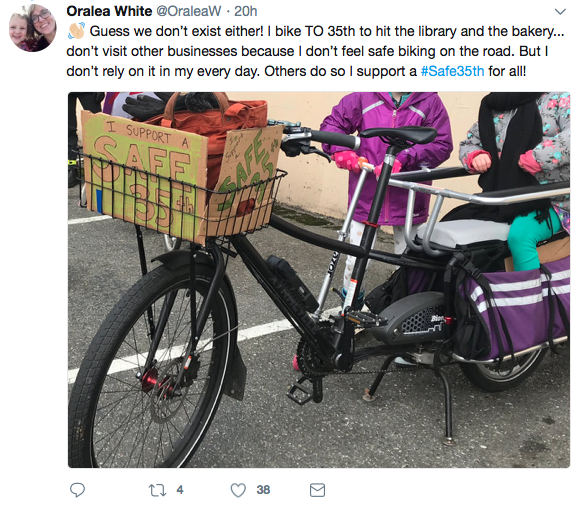 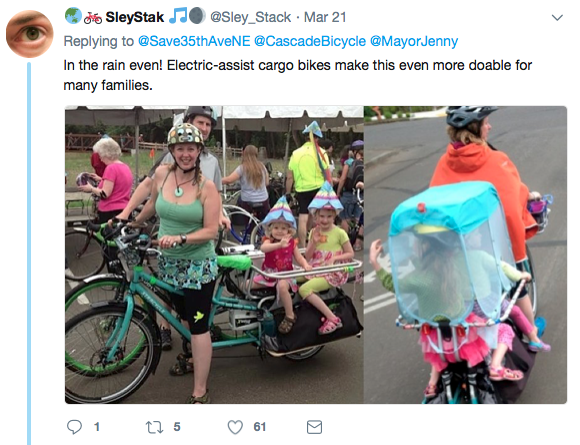 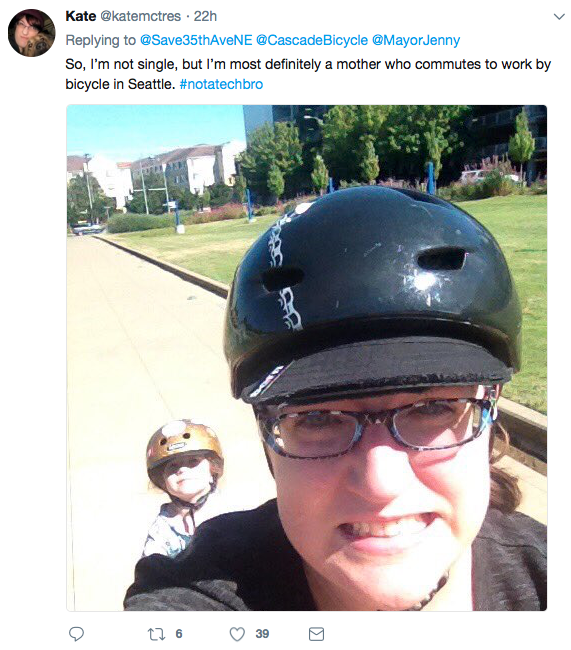 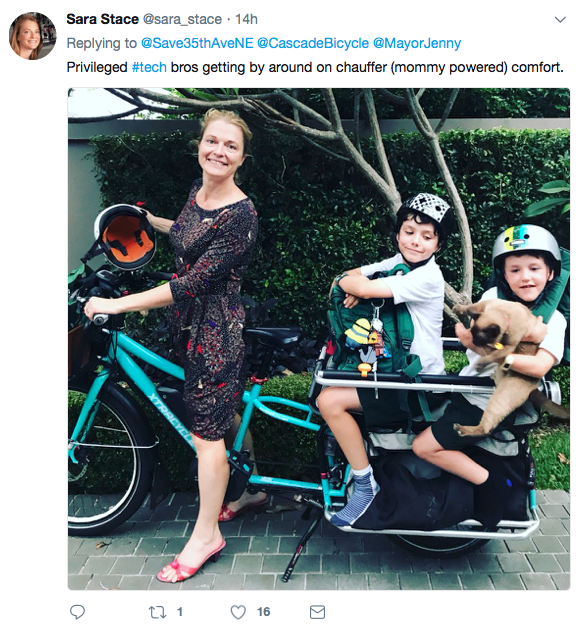 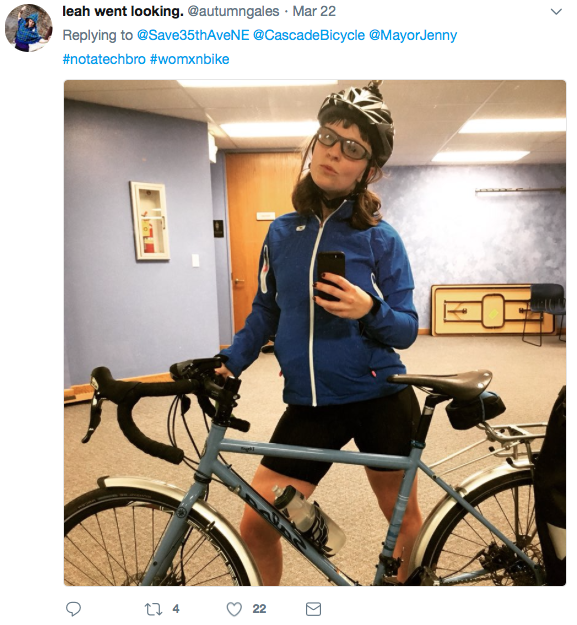 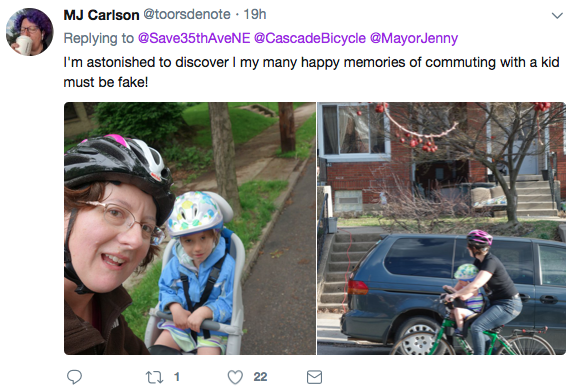 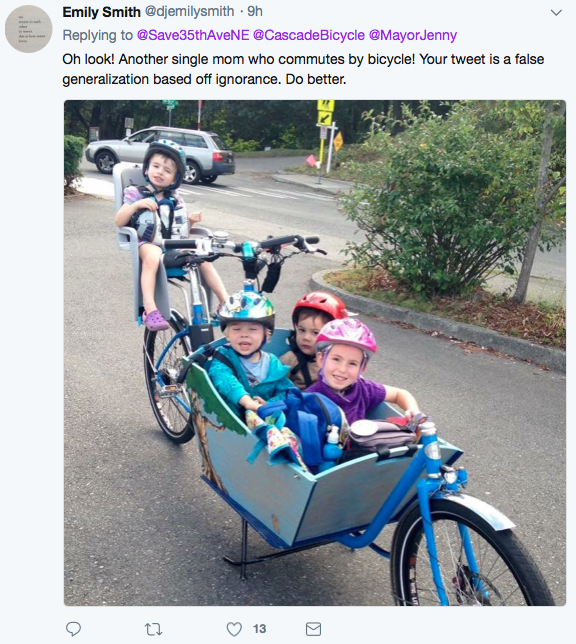 I would like to send a special shout out to all the biking mamas out there. You are awesome and powerful. And what I know after more than seven years writing this blog is that you are the strongest force behind advocacy for a safer and more bike-friendly Seattle.

This entry was posted in news and tagged 35th Ave NE. Bookmark the permalink.