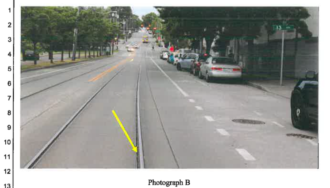 The family of Desiree McCloud has sued the City of Seattle for yet undetermined wrongful death damages following the 27-year-old woman’s fatal crash allegedly caused by the First Hill Streetcar tracks on Yesler Way near 14th Ave.

McCloud was biking with friends May 2016 when she crashed, passing away a week and a half later. After writing about her tragic death, Seattle Bike Blog was flooded with beautiful remembrances from people whose lives she had touched. Friends, family and neighbors held a memorial walk a month later in her honor.

Video eventually surfaced showing McCloud riding between the streetcar tracks just moments before she crashed. The lawsuit claims that she crashed trying to cross back over the track. Streetcar track gaps are just wide enough to grab or destabilize bike wheels.

A year after McCloud’s death, Jon Humbert and a Q13 News crew was filming a report at the spot where she crashed when Suzanne Greenberg crashed right in front of them in much the same way as McCloud. Greenberg spoke to Humbert before being transported to the hospital for some serious arm injuries. She has since joined the McCloud family in their lawsuit.

“The Defendant City knew there were other bicycle crashes occurring when bike tire were caught in streetcar rail grooves before DESIREE’s injuries and death and SUZANNE GREENBERG’s injuries,” the lawsuit filed just before Christmas reads.

Suzanne Greenberg was injured when she crashed her bike near the spot at 13th and Yesler where McCloud had fallen a year after the deadly incident.

McCloud, 27, died following her May 2016 crash that led to calls for safety improvements near Seattle’s streetcar tracks. The city’s investigation was unable to determine if the First Hill Streetcar tracks had caused the fatal crash.

Their joint lawsuit reads like a project list any street, bicycling, and pedestrian planner would be familiar with in Seattle.

Lawyers from the firm Campiche Arnold contend that the city neglected to include a laundry list of street safety measures in the area of the crash including the lack of a separated bikeway on Yesler: 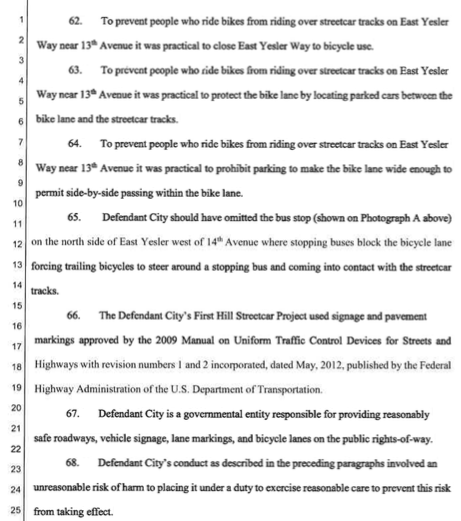 Lynsi Burton at the Seattle PI has more, including comments by Greenberg about her crash and why she’s joining the lawsuit:

“It really goes against Seattle’s image,” Greenberg said. “I would think Seattle would be all about bicycle safety.”

And this wasn’t the only time Greenberg had fallen victim to the dangers of surface street train tracks. Four years earlier, she was trying to cross the South Lake Union Trolley tracks, but failed to cross them at a 90 degree angle and fell there, too.

In the wake of her more recent crash, Greenberg, a Vashon Island resident who commutes to Seattle, missed some work and was forced to sign with one hand while her other arm rested in a sling.

She’s back at work now and intends to return to bicycle commuting in the spring. Her commute hasn’t been as convenient in recent months, relying on public transportation, she says.