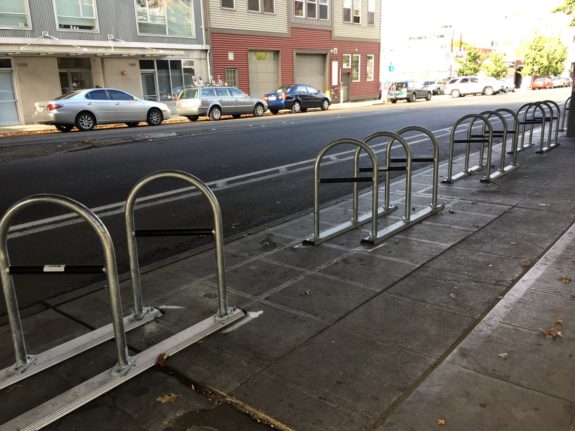 When a long row of bike racks popped up under the Viaduct at Western and Bell, people immediately questioned whether the racks were there to create parking spaces for people to lock bikes or to displace people experiencing homelessness who had been camping in the rare dry Belltown spot.

What is the destination in mind for all that rack capacity? Looks suspiciously like they're anti homeless barricades

Jeff Few, a neighbor, filed a request with the city for records about the bike racks and found that displacing campers was, indeed, the reason the city installed the racks, according to the Stranger:

The city installed the racks in September after officials conducted a homeless encampment sweep in the area. SDOT considered the racks “part of the Homelessness Emergency Response effort” and they were meant to discourage camping, emails show. Few obtained the emails through a public records request.

In a statement to The Stranger, SDOT spokesperson Karen Westing confirmed that the bike racks were part of a “strategy for lessening the hazards of unsheltered living by creating space for a different active public use.” She said SDOT has not made any other similar installments to deter camping.

The racks and installation cost about $6,700, according to Westing. The 18 racks and six mounting rails cost $3,998 and the labor of three crew members for five hours cost $2,718. SDOT used bike racks purchased through the voter-approved Move Seattle levy. However, the department reimbursed the total cost of the project through an SDOT fund specifically for homelessness, according to Westing.

As someone who has been a big advocate of expanding the city’s bike parking, it is disturbing to see hard-won bike racks used in such a way. Bike racks are for improving bike access to businesses and other destinations, not for forming a physical impediment to our neighbors who are just looking for a dry place to sleep. The idea that something this blog and many other advocates for bike access have worked so hard to get into the levy and city budget was used in such an inhumane way makes me feel ill.

If it were a coincidence that the new bike parking displaced some people camping, that might be one thing. But the department admits displacement was the reason. There is no destination near this area warranting that many bike parking spaces. The bike racks were purchased using Move Seattle levy money, but SDOT was reimbursed from a fund for addressing homelessness.

These aren’t bike racks, they are bike-washed “anti-homeless spikes.”

Homelessness is a complicated and difficult issue, and SDOT so far has not been front and center in the debate. Perhaps that has been a mistake. Whether we’re talking about bike racks under the Viaduct or fences under the Ballard Bridge, SDOT needs to do some serious soul-searching and policy revision about what its role should or should not be in creating purposefully-inhospitable spaces for people experiencing homelessness. While there are certainly situations where encampment locations are genuinely hazardous (like, perhaps, skinny ledges above I-5), people experiencing homelessness in our city need a place to sleep.

Sweeping people out from a covered area just forces them to find somewhere else. The city does not have homes for people on our streets, which is the real crime in this situation. But knowing that, what role and under what conditions (if any) should SDOT be playing in further displacement?

This entry was posted in news and tagged bike parking, homelessness, sdot. Bookmark the permalink.