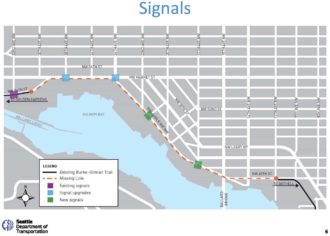 The latest designs include new and upgraded traffic signals to help everyone, whether biking, walking, driving a car or driving a truck.

The design for the Ballard Missing Link continues to move forward, reaching a major milestone that puts it on track for construction starting in winter 2018.

You can check out the latest design details and weigh in at a design workshop 4:30 – 6:30 p.m. Thursday at the Ballard Eagleson VFW.

Of course, the design work is all contingent on a good outcome from an ongoing lawsuit once again trying to delay or derail the project that has reached two decades of debate and legal battles. The lawsuit has already added another truckload to the Missing Link document mountain (this must be the most-documented 1.4 miles of trail in the world). A hearing is currently scheduled for October 16. A pre-hearing conference is scheduled for Friday.

Former Mayor Ed Murray announced the trail compromise in February flanked by local industry representatives and trail supporters, saying, “Today’s major announcement ends 20 years of lawsuits, studies and counter studies.” Seattle Bike Blog asked whether the compromise included a promise not to sue, and Murray said, “I feel pretty good that we have a track record [of getting lawsuits dropped].” So much for that.

Now it falls to Mayor Tim Burgess and Seattle’s next mayor to carry this compromise forward to the end and finish it. I hope they learn from Mayor Murray’s experience and realize that trail appellants won’t stop suing even if you agree to a compromise.

Yet the compromising continues despite the lawsuit. That’s above and beyond what trail supporters and SDOT need to do if the courts are going to decide it all anyway. Dropping the lawsuit probably should have been a condition of compromising. But the city has been actively courting the opinions and needs of appellants, anyway. And that’s the best the city can do at this point: Bring as many people as possible into the design process, address as many concerns as possible, and then build it.

Details of the community design should help ease many trail opponents’ worries about the project. The number of parking spaces removed has been greatly reduced in the latest design. While original estimates from the environmental mega study put the parking space removal count at 344, the design team was able to squeeze in 186 more spots. So the trail will now displace fewer than half as many parking spots as originally announced.

While the number of parking spaces is certainly not Seattle Bike Blog’s biggest concern with this project, the work to add spaces back is an example of how this community design process works. Parking was a big concern by many people opposed to the project. This is what compromise looks like in action.

The project will also look at how to better manage the parking so that it is used more efficiently to support businesses. Right now, it is almost entirely unpaid, 72-hour parking. As seen with the Westlake Bikeway, adding time limits in many spots and paid meters in the busiest areas can encourage more turnover, which increases the likelihood that a customer will find an open spot nearby. Someone storing their car for 72 hours is not the best use of in-demand parking spaces, and it’s certainly a bad reason to stop a vital biking and walking trail.

So the team is both adding as many spaces as possible and finding ways to use them all more efficiently. 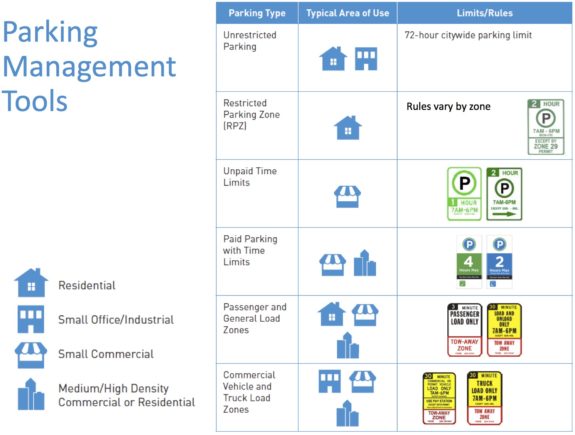 From a presentation to the Design Advisory Committee.

The design process is also clarifying how industrial driveways will work to make sure trucks can get in and out safely.

The trickiest part of this whole compromise route for the trail is the corner of Market St and 24th Ave NW. The most recent design would call for a mixing zone, which is far from ideal: 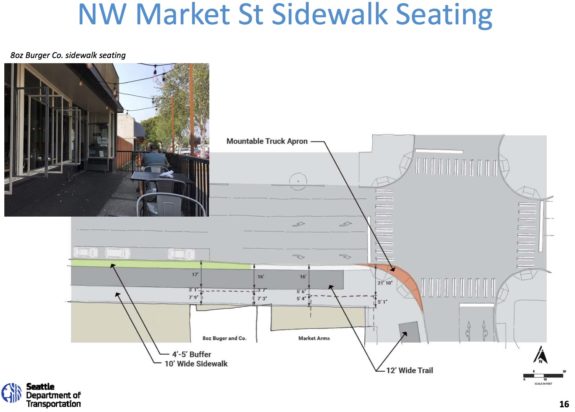 The trail has many mixed corners already (Stone Way, 15th Ave NE, the Ave, 20th Ave NE, etc), but this one will be a little different because the trail can continue through while people on foot are waiting to cross the street. In most of the other examples, people on the sidewalks and trail users are all stopped at the same time. In this case, trail users will have to make their way through people who are waiting.

I don’t think this is an impossible situation, but it’s going to be especially necessary for trail users to be patient and yield to people on foot.

There’s also a ton of road space (five lanes), so if a mixing zone is deemed too crunched, the trail and sidewalk space could be extended further into the street space. This will certainly trigger worries of traffic backups (and delays for the 44 bus), though.

One cool feature in the design presented to the Design Advisory Committee is a “mountable truck apron” on the corner. This effectively extends the curb further to create more of a buffer between turning vehicles and the sidewalk and to slow driving speeds around the turn. But it also provides space that big trucks need to make their wide turns. Most vehicles should drive around the “apron,” but trucks can roll over it when they turn.

There are so many corners in the city along major truck streets where we need this. Because it makes no sense for a street to be designed dangerously 24/7 just to accommodate the small percentage of trucks that actually need a wide corner.

More details on the ongoing design project, from SDOT:

Our team has been hard at work designing the Missing Link corridor to safely meet the needs of all users. We received lots of great feedback during our last round of design workshops in early summer 2017. We now want to share the updated design for all three segments and report back on how we used your thoughts to refine the project.

The project team will be available to listen to your feedback and gather your input as we continue to refine the Missing Link design and create a corridor that is safe for everyone.

Can’t attend but want to provide your input?

Additional engagement opportunities are coming up this October, including a public event on October 12 and a self-guided walking tour on October 14. An online open house will also be available between October 9 – 23. Mark your calendar and visit the project website to learn more!

Founder and Editor of Seattle Bike Blog.
View all posts by Tom Fucoloro →
This entry was posted in news and tagged ballard, missing link, sdot. Bookmark the permalink.