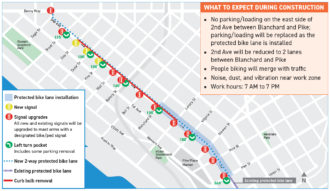 Work on the street has been ongoing for quite a while as the city prepared it for bike lanes and other improvements for all modes, such as badly needed signals at several Belltown cross streets.

But now work on the two-way bike lane itself is ready to begin. Like the existing section of the bike lane, which opened three years ago, both directions will be on the east side of the street. Intersections will have separate signals for people biking and people making turns.

Crews will begin work Monday that will last two weeks, wrapping up October 2 (if all goes smoothly, of course). For the first couple weeks, the bike lane will be southbound-only as crews work on the new and upgraded traffic signals needed to activate the northbound direction. That work is scheduled for completion in October, according to SDOT spokesperson Mafara Hobson.

UPDATE 9/19: SDOT now says the opening will move more slowly, with full completion in November and December: ” To clarify, we’re working on sections at a time, so if all goes well, the 2nd Ave protected bike lane will have a soft opening to southbound bikes between Pike and Virginia in October. The contractor will still close the bike lane intermittently to get the pavement markings and signals in. Because northbound is a new movement, the signals must be in place and functional before it can be opened. We just got word that the signal pole order is being held up because of Hurricane Harvey, so the northbound direction (again between Pike and Virginia) will most likely open in November. The rest of the extension to Denny will open in increments over the following month. We’ll be in touch as all these moving pieces come together.”

This project will revolutionize bike travel in the city. You will be able to bike from the Smith Tower to the Space Needle almost entirely on a protected bike lane. For the first time, people will have a comfortable northbound bike route through Belltown.

And the city will get rid of a sorely inadequate, skinny, paint-only, left-side, door zone bike lane in the process (good riddance).

It’s hard to be too excited for this project. This is a really big deal for Belltown, Uptown, Seattle Center, Queen Anne and major bike routes headed to the Fremont Bridge, the Elliott Bay Trail and beyond.

Unfortunately, people who use 2nd Ave north of Pike Street today will face a couple weeks of mixed traffic construction detours. With construction on 7th Ave also closing that bike lane, this means there will not be a single fully open bike lane between Denny Way and Pike Street from Elliott Bay to I-5. While people who bike through Denny Triangle and Belltown regularly are already used to inadequate construction detours, I think it’s important to zoom out and realize just how thoroughly construction has blocked major bike routes that connect huge swaths of the city. Though city staff are sure to have an excuse for every single closure, the cumulative effect is that we’re closing bike lanes faster than we’re opening them. And now we’ve reached the logical conclusion of that trend: Two weeks of total bike route failure.

At least this construction project is working to fix part of the problem.

This is one more reason why the Basic Bike Network is so important. Seattle needs a connected “grid” of bike routes to allow for flexibility and reliability. If work does need to close one route, people need to know they will either have a temporary bike lane of comparable comfort or a comfortable reroute around the work zone. Someone who does not feel comfortable biking in heavy mixed downtown traffic needs to know there will be a separated bike route for them when they get downtown. Otherwise, they aren’t going to choose to bike. And with traffic only getting worse, Seattle desperately needs more people to choose to bike. (And since all the bike lanes are now closed, you officially can’t blame the traffic on bike lanes.)

The good news is that bike lanes planned on 7th Ave and Pike/Pine are in the works to tie into the new 2nd Ave bike lane extension. If the city actually connects these lanes to existing routes heading north and east (so far, plans fall just short), major pieces of the bike network could be in operation by the end of the year.

But the city will also need to protect these routes once they are constructed so more people can rely on biking to get around.

For as much lip service and big idea planning as this city has done for biking, the fact that we will close out summer 2017 without a single open bike lane in the entire north section of the center city shows that the city has failed. (Aside from the Alaskan Way Trail, the same goes for the south section of downtown. Unfortunately, that is not due to construction impacts. The city has never built a south end connection.) 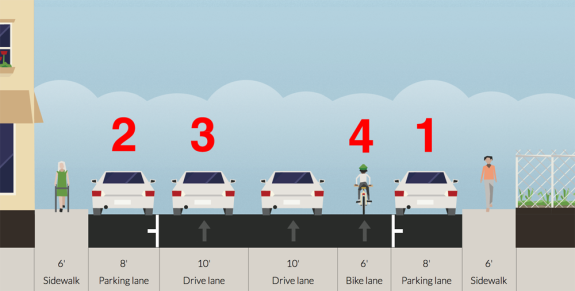 Our proposed order of operations for closing lanes to make space for construction. Sidewalks shouldn’t be an option at all. Parking goes first. Bike lanes shouldn’t be closed until the city runs out of other lanes to close.

The city needs to view a bike lane as a promise to its residents, workers and visitors. That means the city needs to keep it open in at least some comparable form. We have written before about the order of operations we think the city should require when construction projects close sections of streets. The Seattle Bicycle Advisory Board has also told the city about the importance of maintaining bike lanes of comparable comfort during construction.

With only a few notable exceptions, the city has so far disregarded this need. And that’s why we find ourselves in this situation, where there are no open bike routes into our biggest employment and civic center. I understand that the amount of construction is extraordinary right now, but SDOT must do better.