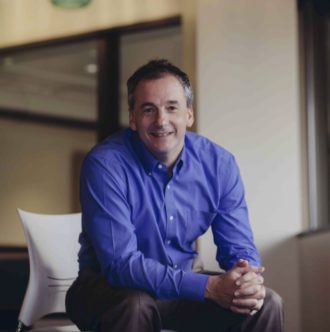 Richard Smith will be the new Executive Director of Cascade Bicycle Club and Washington Bikes, the organizations announced Friday

Smith comes from Microsoft, and the press release says he was “the executive sponsor of his division’s Diversity & Inclusion efforts” and has worked as a board member for the Seattle Chapter of the Juvenile Diabetes Research Foundation.

Smith takes over an organization that has been without an Executive Director since the end of December, when Elizabeth Kiker left. And they will go a little longer without an ED, too. Smith starts September 5.

Smith joins Seattle Neighborhood Greenways’ Gordon Padelford as a white man taking over a local safe streets organization leadership position previously held by a woman. Commute Seattle’s Jonathan Hopkins also recently took over for Jessica Szelag. So while I congratulate these men on their new roles, I also hope they recognize this quick shift toward white male leadership and go far above and beyond to be inclusive and empowering to everyone through their work.

Here’s the full press release from Cascade and WA Bikes:

After an extensive nationwide search, Cascade Bicycle Club and Washington Bikes announced Richard Smith as the new executive director of the organizations. Richard will begin his role on September 5.

“The board is excited to welcome Richard Smith as Cascade Bicycle Club and Washington Bikes’ next executive director,” said Charles Ruthford, Cascade board president. “Richard has the passion and proven experience in change management and leading organizations through transformation — perfect as we continue to evolve and grow as a statewide organization.”

“I am honored and privileged to lead the staff of the Cascade Bicycle Club and Washington Bikes to achieve our mission of improving lives through bicycling,” said Richard Smith. “Bicycling is a crucial part of our Pacific Northwest outdoors identity, and enabling more people to enjoy this wonderful activity is a great reason to go to work every day.”

Richard brings experience in the nonprofit sector. He is currently a board member with the Seattle Chapter of the Juvenile Diabetes Research Foundation and has raised over $250,000 for the local Beat the Bridge to Beat Type 1 Diabetes event. Richard was also the executive sponsor of his division’s Diversity & Inclusion efforts at Microsoft and is looking forward to applying the learning and investments Microsoft provided him in this area for building equity, diversity and inclusion at Cascade and the broader bicycling community.

“Cascade has grown to be a tremendously successful organization for its members and community,” said Richard. “I am looking forward to continuing that success and working with the staff, board, our passionate volunteers, and the broader community to make bicycling accessible and safe for everyone.”

Originally from England, Richard has lived in Seattle for the past 25 years. Richard came to Seattle from New Zealand, where he had lived for 18 months, and landed at SeaTac with his wife-to-be, Jeanne, along with a backpack and a bicycle in a box. Richard always had a bike ready to go, but more recently, with the help of the Cascade Training Series, became confident enough to take on the one-day Seattle to Portland (STP) challenge, Ride from Seattle to Vancouver and Party (RSVP), Chilly Hilly and other local rides such as 7 Hills of Kirkland and RAMROD. “Bicycling has become my passion and importantly a great tonic for mind and body,” said Richard.