Spin reaches 1,000 rides in first two days, have you tried it yet? 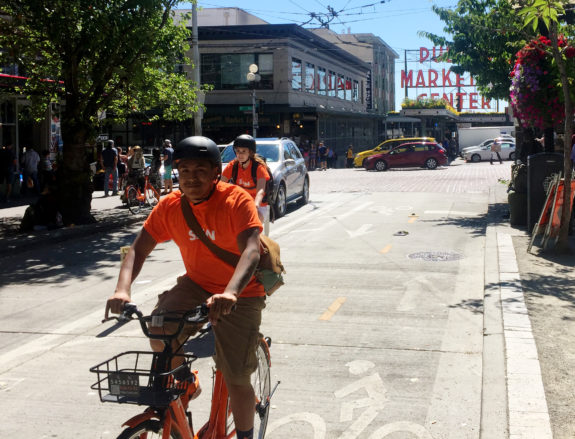 Spin staff were biking around Monday helping people learn about the new service.

People took 1,000 rides on Spin bikes during the company’s first two days of operations, the company said via Twitter Wednesday:

Seattle, we’ve officially crossed 1000 rides in barely two days. Thank you for all your support and here’s to the next thousand! 🙌 pic.twitter.com/g9hgpq4gWJ 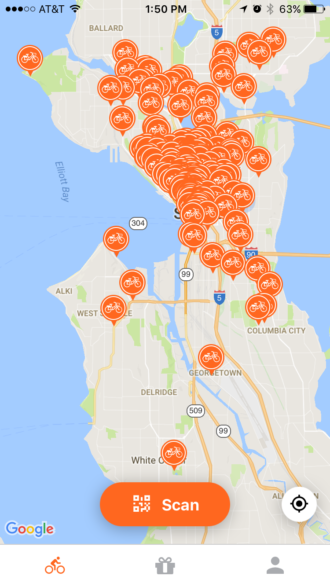 A snapshot of available bike locations as of Wednesday afternoon, following two full days of use.

The launch Monday is the young company’s largest venture, so it’s pretty impressive to see their bikes get solid use so quickly out of the gate while they are still putting more bike on the streets and squashing inevitable bugs in the system.

As a comparison, Pronto saw 3,134 rides in its first week of operations, but averaged only 394 trips per day over the course of its first year. July and August weeks saw more than 4,000 rides on Pronto.

Of course, it’s hard to compare the services based on the number of bikes alone. Pronto had stations, so getting a bike was dependable if you knew where the stations were. With Spin, dependability will increase as the number of bikes increases. They are limited to 500 for the first month, but a sustainable number is much higher than that. In a press release Monday, the company said they have their sights on 10,000 bikes eventually.

Both Spin and LimeBike have said they wish they could go bigger at launch, but the city’s rules are written to ease into the water rather than jump into the deep end. LimeBike has a couple bikes in circulation, but their real launch is still on the way (they said they hoped to be launched by Friday, so stay tuned). In a month, the companies can add other 500 bikes. The next month they can add another 1,000. After another month, the limits will be lifted, assuming things are going well. So think of the service as it is as a beta test of the concept.

Spin has focused distribution of its first 500 bikes on areas in and around downtown, but users are allowed to ride them anywhere they want within the city limits.

As of Wednesday afternoon, people had biked as far south as Georgetown and White Center. Several bikes have gathered in Columbia City, Mount Baker, Fremont and the U District. Some have made it to West Seattle and Ballard. One even made it to the end of Discovery Park at the bottom of that massive hill near the waste treatment plant (that one might be there for a while unless Spin staff or a very ambitious user rescues it).

It’s very interesting to note that demand seems higher in Beacon Hill and Rainier Valley than Green Lake and Greenwood.

So far, fears that people would park the bikes poorly have not been founded. Almost all I have seen were parked according to the city’s rules (outlined in this handy graphic we put together). I have seen a couple parked on grass planter strips, which is technically not allowed. But I dunno, if the grass isn’t super well cared for anyway, this doesn’t seem like such a big deal. I’d be much more concerned about bikes blocking bus stops, businesses or accessible parking spaces, and I haven’t seen those issues yet. So good work, everyone!

And hey, if you want this bike share thing to work out, go ahead and fix any improperly-parked bikes you see around.

There are so many questions about how this is going to work in Seattle, and Spin is tackling them in real-time as they arise. It’s pretty bold to put your company out there like this. Sarah Anne Lloyd, who has been covering the bike share story for Curbed, and I joked on Monday that LimeBike is using Spin as their canary in a coal mine. Not a bad strategy, perhaps.

So far, the two companies have been very friendly, but they also both clearly want to come out on top. LimeBike hid the fact that they had 8-speed bikes for months in hopes their hill-climbing prowess would give their bikes an advantage. For their part, Spin sprinted out of the gate to beat LimeBike to the opening day press and capture people’s first rides on one of the new bike share services. Derrick Ko of Spin and Gabriel Scheer of LimeBike recently sat down together with KUOW’s Bill Radke. Despite all the naysayer caller comments (give them a chance!), it’s worth a listen.

As with any new venture, there are some bugs in the Spin system. Some people have reported some bugs in the app (bikes displayed that aren’t actually there or promo credits being calculated strangely). Hopefully, those are easy software fixes.

By far the biggest complaint I’ve heard about Spin’s bikes has been the gearing. The bikes are not heavy, but they only have three gears. And the lowest gear is not low enough to get up popular bike routes like Pine Street without standing up and putting in a significant amount of work. Climbing hills is never going to be particularly easy, but lower gears allow you to sit back and take your time.

Even before the service launched, Spin staff was talking about lowering the gearing on their bikes. If they want many users to help them distribute bikes back up hills, they will definitely need to do that.

The company responded to the low gear suggestion with this promising cat GIF:

A couple of the bikes I’ve tried have had issues shifting smoothly or staying in the low gear. I’ve heard from readers who have reported the same issue. This might just be a maintenance issue, but it’s something for Spin to keep an eye on.

The bikes also only have a headlight and rear reflector (this is all WA law requires). Many people have voiced a desire for a rear light, and Spin says they are looking into making that change:

Glad you liked it, @StumpToEmerald. We’re already looking into having back lights (not just reflector) on the next batch.

UPDATE: The company has also responded to concerns that the headlights are too flimsy and should come on automatically (there is an on/off switch, but it’s not very obvious):

Glad you enjoyed the ride 🙌 We're improving our lights so that riders don't have to switch them on (or off). Keep the feedback coming! ❤️

So far, the company’s receptiveness to suggestions for improvement already put it on a better track than Pronto, which consistently failed to make significant improvements to its service despite years of suggestions from users and yours truly. Of course the real test will be whether the company follows through.

With only 500 bikes, it is hard to serve areas very far from the downtown core without spreading the network too thin to be useful. Critical mass is the key to a bike share system’s success. That means being able to depend on a bike being within a convenient distance from you at any time. So don’t expect more than a handful of bikes to make it out of downtown in the first month while numbers are so limited.

However, the companies need to focus on serving south and far north Seattle as soon as they can. This means not only distributing bikes there, but also focusing marketing efforts there to help people learn how to use them.

They also need to find a way to provide access to their bikes to people who can’t afford a smart phone and a data plan. The company is thinking about this already, and told the Bicycle Advisory Board last week that they are working on ideas for possibly charging accounts using cash and unlocking bikes via SMS messaging (you still need a phone, but a cheap one will do and no data plan is required). They also said they were looking into how the company can work with existing programs, like ORCA Lift, to help people get access and possibly get discount fares.

I love all these ideas, and I’m sure there are many more out there to explore. The next test will be to get them into action.

Have you ridden a Spin bike yet? Let us know how it went below!

I haven’t pedaled a @Spin_Seattle bike yet, but we tested the basket and it’s the perfect size :) #SEAbikes pic.twitter.com/ZIcOAK0Ncv

40 Responses to Spin reaches 1,000 rides in first two days, have you tried it yet?