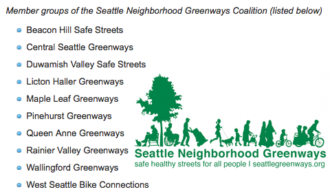 Traffic enforcement is often cited as one of a community’s strategies for achieving Vision Zero. But a traffic violation should not lead to someone being deported.

That’s the message of a letter signed by a coalition of groups working with Seattle Neighborhood Greenways. This doesn’t mean the city should give up on Vision Zero, of course. It means the city should focus on other tactics, like designing safer streets and using automated enforcement. Seattle Bike Blog agrees.

The undersigned members of the Seattle Neighborhood Greenways Coalition release the following statement in response to the Trump Administration’s announcement on 2/21/17 that a forthcoming executive order may expand deportable offenses to include traffic violations.

Advocates for safe streets have tired of hearing the trivialization of traffic violence as “just a traffic violation” or “no more important than a speeding ticket.” Traffic violations can lead to death and serious injury, especially for vulnerable users of our streets. People walking and biking are frequently the victims of such injuries, and seniors, children, and people with disabilities are disproportionately at risk.

However, as one of the coalition of groups that make up Seattle Neighborhood Greenways, we forcefully reject the Trump administration’s plan to pursue deportation for undocumented immigrants who have committed minor traffic offenses. Individuals in low-income communities and communities of color are disproportionately killed and injured by traffic violence on our streets. Now, the primary victims of this violence may also be unfairly targeted by biased and punitive enforcement.

We refuse to allow Vision Zero — Seattle’s goal to eliminate all serious and fatal traffic injuries by 2030 — to be perverted into an excuse to round up and deport our undocumented neighbors and friends, just as we have previously denounced racial profiling committed in the name of traffic safety.

The undersigned seek to work with, not against, the very communities now under attack by the xenophobic and racist policies of the federal government. We declare unequivocally that Vision Zero must not be used as a cover for raids, racial profiling, or other unjust attacks on our fellow Seattleites.

We support the following actions to address traffic violations while minimizing biased enforcement:

Member groups of the Seattle Neighborhood Greenways Coalition (listed below)