Spring Street bike lane is a big improvement, but it ends just short of First Hill 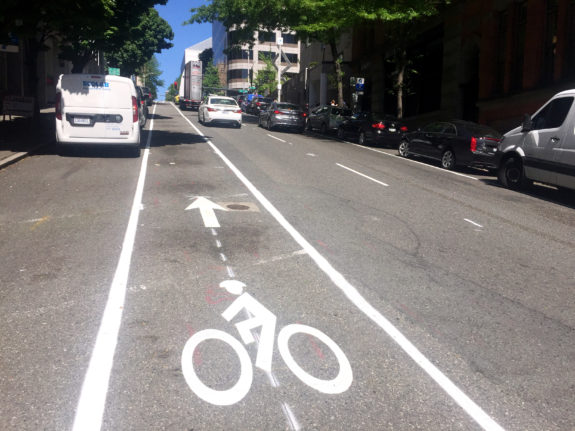 Downtown just got a new bike lane on Spring Street.

It’s not the kind of bike route addition that’s going to start any biking revolutions, but it’s a major improvement over what was there before. And with just a few adjustments and a three-block extension, it could have a big impact on bike access to First Hill.

The new lane is not the final design for Spring Street. It is a decently wide, paint-only bike lane up a steep hill placed in the door zone of parked cars. So why, you may ask, am I excited about it?

Because it is a major improvement over what existed previously, it is coupled with an improvement for Metro’s excruciatingly slow Route 2 bus, and it wasn’t supposed to happen at all until 2019 when the Madison BRT project is constructed. It’s a quick and inexpensive way to make a signifiant improvement for biking immediately. When (if) the Madison project is constructed in a few years, that’s when the city can invest to make it a proper protected bike lane. 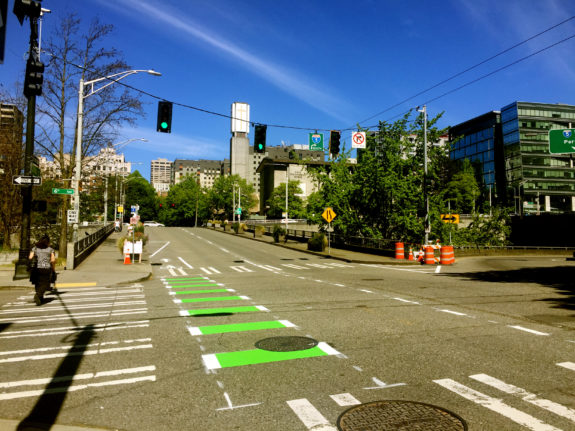 And vitally, the new sections of bike lane cover the most important stretch for the street: 4th Avenue to the bridge over I-5. People heading to First Hill already used Spring Street previously, but they were left to their own to navigate steep climbs in mixed traffic to get to 9th Ave. 9th is a well-used street for biking that connects Virginia Mason and Harborview. It also connects to University Street, which is a planned neighborhood greenway and is already well-used as a bike route due to its relatively forgiving grade. 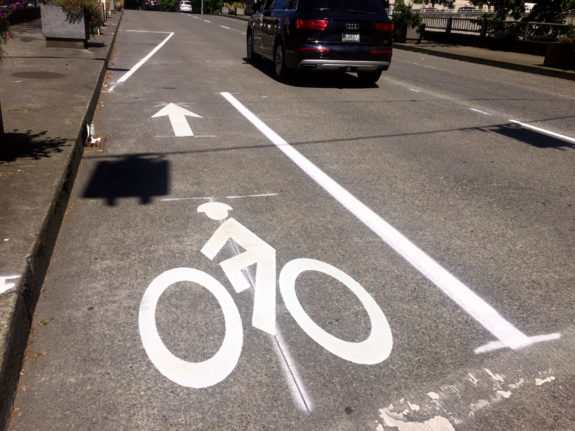 This brings me to the first proposal for making this bike lane better: Extend it from the abrupt end at the I-5 bridge to 9th Ave. It’s only three blocks further, two of which already have a painted bike lane. 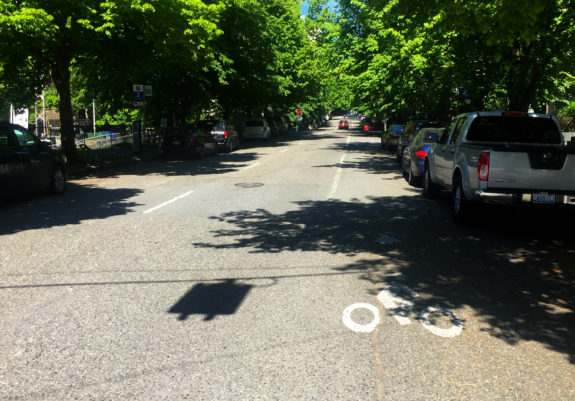 In fact, that existing bike lane is a major reason why this change should happen sooner than later: It’s on the opposite side of the street, which makes no sense. Why force people to merge across two lanes just to get to the bike lane, then merge two lanes again to make a left towards University Street? Just move it to the left and you’ve got a significant and direct connection.

Preferably, the city could move quickly to get this segment done this summer so First Hill isn’t left with a disjointed three blocks until 2019.

The city also needs to keep a close eye on how the left turns at 3rd, 4th and 6th Avenues are working to make sure people biking are not getting cut-off (or worse) by people who don’t expect them to come up on the left.

The good news is that SDOT already has some good ideas in place to help. For example, the 6th Ave traffic light now gives the walk signal a short head start. People on bikes could also use this head start as a chance to get in front of turning cars:

Early green for walkers during bus queue jump at spring and 6th pic.twitter.com/nrPdMORcW7

The new Spring Street lane also sets the stage for an extended and much-improved 4th Ave bike lane. Especially if the city makes the 4th Ave lane two-way (*fingers crossed*), Spring will become that much more useful as a connection to First Hill, since it would become the best way to get there from Westlake. 4th Ave improvements are supposed to be installed this year.

So no, the new Spring Street lane isn’t a protected bike lane, and it’s definitely far from perfect. But installing imperfect improvements sooner with clear plans for a full-build later is going to be an important strategy for building the connected Basic Bike Network Cascade Bicycle Club and Seattle Neighborhood Greenways have been promoting.

And let’s be serious, Spring Street is ridiculously steep, especially between 1st and 4th Avenues. Few people are going to go up this street too quickly to avoid obstacles, and it’s not the kind of street that’s going to attract lots of people new to biking (powering up the hill probably doesn’t look too fun). But it’s an important connection for many people, and the painted lane helps take a huge amount of stress out of the climb.

8 Responses to Spring Street bike lane is a big improvement, but it ends just short of First Hill