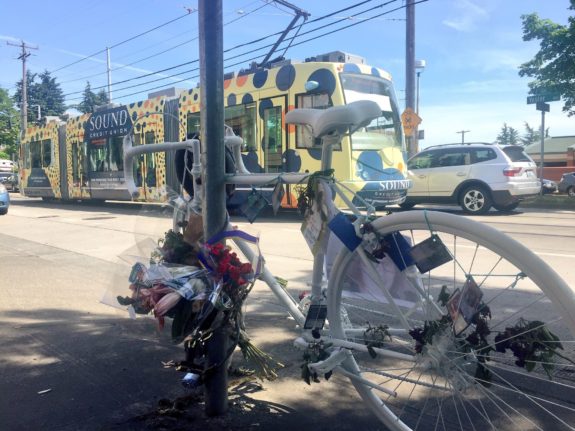 Friends, family (including her brother Cody) and community members walk in honor of McCloud. Her ghost bike sits at 13th and Yesler.

One year after the bike crash at 13th and Yesler that took Desiree McCloud’s life, her brother Cody has filed claims against Sound Transit and the City of Seattle that blame the First Hill Streetcar tracks for her death.

Cody told the Seattle Times that the claims are “not about the money. It’s about a message: ‘Don’t kill me on these streets.’”

Streetcar tracks are known hazards for people biking because bike wheels can slip into the gap in the tracks and either get stuck or knock the rider off balance.

Desiree was biking westbound on Yesler with a group of friends when she ended up between the streetcar tracks while passing a friend, as surveillance video showed. This means she would have needed to cross the track again to get into the bike lane. Her friend told police she then saw Desiree wobble and fall. No other vehicles were involved.

She died a week and a half later from her head injury. She was 27.

At a memorial walk in her honor, one friend described her as “brash and brilliant, passionate and true.” These are themes that run through the incredibly moving remembrances friends sent to Seattle Bike Blog after she passed away.

“If one of her friends had been hurt or killed, she’d be the one banging on City Hall,” her father said after the memorial.

Cody’s claims, which will exceed $2 million, are the first step in taking legal action. If the city and Sound Transit do not fulfill the claims within 60 days, then it will become a lawsuit and head to the courts.

Though the official police report concludes that the role of the streetcar tracks in the crash “appears impossible to resolve,” Cody’s legal team said they can prove the tracks caused the crash, according to the Times.

After the memorial, there were calls, including a petition, for the city to take serious action to make safety changes along the First Hill Streetcar route. Specifically, the Central Seattle Greenways petition said, “Immediately, Seattle Department of Transportation (SDOT) needs to provide continuous, intuitive, protected bike lanes on Yesler between 14th & Broadway to protect people biking from the streetcar tracks.”

Protected bike lanes would not only make the street safer and more comfortable for people biking, they would also help people biking stay clear of the tracks.

But no significant changes have been made a year later, and the problem isn’t going away. In fact, Q13 reporters were out filming B-roll yesterday for their report when another woman crashed on the tracks in nearly the same spot. She spoke to their reporter Jon Humbert before heading to Urgent Care to take care of her injured arm:

Can’t believe it. Doing a story about the death of a biker on trolley tracks & a person fell while we nearby. At urgent care now. pic.twitter.com/Jljp2KD2Og