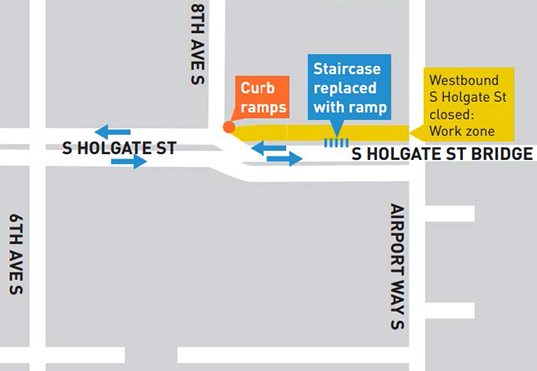 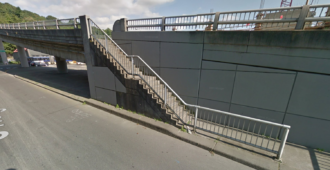 The only sidewalk on the Holgate Bridge currently turns into stairs. SDOT is replacing the stairs with a ramp. Photo from SDOT.

The S Holgate Street Bridge is far from the friendliest bike route between Sodo and North Beacon Hill, but it is definitely the most direct. But because the only sidewalk on the bridge turns into a staircase at the Sodo end, people biking have to take the steep and often scary roadway. Worse, the bridge is not accessible at all to people who can’t navigate stairs.

But there’s some good news. The city is making some key changes to at least make the sidewalk accessible and provide an option for people biking who don’t feel comfortable or safe on the steep roadway. The project will also make some improvements to help people cross to the north sidewalk at the Sodo end of the ramp.

Work is already underway and will continue into September.

The project will not make Holgate a great route for biking and walking, but it will address the most basic accessibility needs. And that’s a good thing.

Since opening a 2011 extension of the Mountains-to-Sound Trail that connects from the south side of the Jose Rizal Bridge to Holgate, the bridge has become an even more important part of the city’s bike network. For a huge number of homes, it’s simply the fastest way to get to jobs and other destinations in Sodo.

Shortly after the trail extension opened, however, the shortcomings of the Holgate Bridge became clear. Bicycle adventurer, writer, speaker, Beacon Hill resident and all-around hero Willie Weir wrote about his concerns with the bridge back in 2011:

With the stairs turned into a ramp, people will be able to take the sidewalk to get between the trail and Sodo. I’m sure people who feel comfortable going fast will stick to the roadway, but anyone who doesn’t will at least have another option.