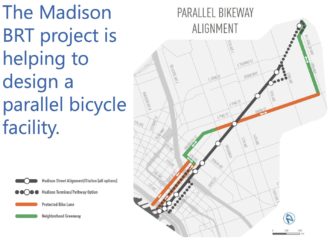 This slide is from a Madison BRT project team presentation to the Seattle Bicycle Advisory Board in June 2015 (PDF). Nearly all these bike connections have since been deleted from the plan.

The latest plans out of the Madison BRT project (RapidRide G) cut nearly all of the planned bike improvements that were originally planned nearby as part of the high-budget so-called “multimodal corridor” project.

We reported in depth about the cuts last week, and safe streets groups and upset residents are pushing back. There are several ways you can get involved right now to make sure the project team, city leaders and the Move Seattle Levy Oversight Committee know you want the deleted bike lanes and neighborhood greenways back in the project as was presented during public outreach that began more than two years ago.

First, today (Wednesday) is the final day to comment on the project’s online open house. It takes quite a few clicks to get to the comment area, but stick with it.

Second, Seattle Neighborhood Greenway put out an action alert today urging people to email the project team and SDOT leaders urging them to keep the promises made early in the outreach period and during the Move Seattle levy campaign. They even have a handy online form you can use to send your message. UPDATE: Cascade Bicycle Club also has an action alert.

Third, reader Zach Lubarsky is urging people to provide public comment at the start of Thursday‘s Move Seattle Oversight Committee meeting. Show up at Seattle City Hall Room L280 before 5:30 p.m. to provide a short comment asking the committee to hold SDOT accountable for promises made leading up to the levy vote.

The presentation also asked the Board whether they preferred a two-way or one-way option and presented the results of hundreds of public outreach responses to the question to that point, which was essentially split between the two options. The option of not building any bike lanes was not presented.

Of course, these routes were not final decisions. A few months later (around the time of the levy vote), the project team had expanded their options to include a possible neighborhood greenway on Denny in the mix.

But a bit more than a year later, nearly all the bike connections have been cut. Here’s how the team’s bike maps evolved:

This all comes at a very strange time for the project. News broke last week that the Trump administration has the project’s Federal funds in its crosshairs. The $120 million project was counting on $60 million in Federal grants to fill half its budget, so it is not clear how the project could survive if the cuts make it into law:

As frustrated as I am about the cuts to the bike elements of this project, rapid bus service on Madison would be huge for Seattle. So once you’re done contacting local leaders about restoring the bike elements in the Madison plans, contact your Federal leaders about preserving transit funding. Seattle Transit Blog has the list of what needs saving and who to contact in this post.

With top level transportation leadership so unpredictable and generally hostile in this nation right now, it’s that much more important that efforts for better walking, biking and transit in Seattle stick together. Our collective vision for a Seattle where more people can more easily, safely and affordably get around town (essentially, the vision Move Seattle presented when voters approved it) can be a powerful tool of resilience against a hostile Federal government.

This entry was posted in news and tagged madison brt, rapidride g. Bookmark the permalink.