Neighbors submit 900 ideas for park and street improvements, but city can only fund a small percentage 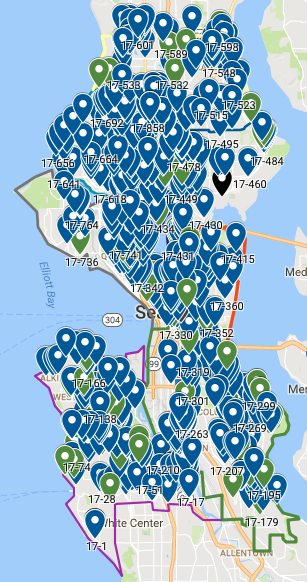 From an interactive map of submitted ideas.

Seattle is trying a whole new method for gathering community ideas for small park and street improvements, and the people have responded. Loudly.

Neighbors from all over Seattle submitted nearly 900 ideas for street and park improvements (up to $90,000 in cost), which is a huge success for the new community outreach process. And a look at the interactive map of submitted ideas shows that ideas are distributed well across the city, which is a strong marker of success for a brand new citywide outreach effort.

But it’s also maybe a bit of a problem since the city only budgeted $2 million to go around.

I know $2 million sounds like a lot of money, but it is only enough to fund 23 projects if each project uses the maximum budget allowed (of course, not all will do so). That’s only enough for a small percentage of ideas to become reality.

A lot of the ideas are about making streets safer and more friendly for people walking, biking or just trying to spend time hanging out and enjoying their neighborhood. Not all the 900 ideas submitted are feasible, but they are a place to start.

The “Your Voice. Your Choice; Parks & Streets” process has replaced the old Neighborhood Park and Street Fund, which went through the city’s various District Councils. The hope is that the new process will be more inviting to more people with city staff reaching out to many different groups directly. A growing and changing city needs a versatile outreach process that can find people where they are rather than requiring people to go through their District Councils.

Mayor Ed Murray’s Department of Neighborhoods has been moving away from its reliance on the established District Councils, much to the dismay of many members of those Councils. The Councils are often organized differently depending where they are located in the city, but they are typically comprised of members of smaller neighborhood associations and church communities. A lot of dedicated neighborhood advocates have volunteered a lot of time to these Councils over the years, so I understand their frustration.

But the demographics of the Councils, which tend to be older and whiter, do not match the demographics of the city. Organizing through neighborhood associations is not everyone’s preferred way to be engaged, and many parts of town don’t have a neighborhood association at all. But the newest issue is that the District Councils do not share the same boundaries as the City Council Districts, which are becoming more and more the way Seattle neighborhood “regions” are organizing themselves. I’m sure there are many, many people in Seattle who have no idea which District Council they belong to (if you live in Wallingford, for example, your District Council is “Lake Union” and also includes South Lake Union for some reason).

The strong results from this process are a good sign that the new outreach strategy is working so far. The challenge now is to make sure people who have volunteered their time and ideas at least feel their time was valued and had an impact, even if their projects don’t make the cut.

Another big change is that you can still be involved in your neighborhood’s park and street project development. Where ideas previously went to District Councils, now anyone can show up to be part of the development and voting process.

Project development meetings are already underway in every District. Here’s how you can get involved and find meeting times near you:

10 Responses to Neighbors submit 900 ideas for park and street improvements, but city can only fund a small percentage