Seattle should divest from Dakota Access Pipeline, and we also shouldn’t buy the oil they’re trying to pump 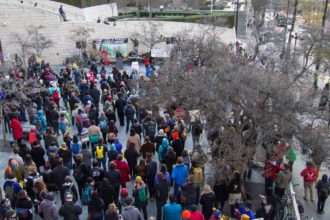 The City Council is set to vote Monday to end its banking business with Wells Fargo as a political act in response to the bank’s funding of the Dakota Access Pipeline. This action is in solidarity with Native American communities leading actions to protect their water and the Standing Rock Sioux’s rights.

The Council’s Finance Committee recommended passage of the bill Wednesday 8 – 0 within hours of news breaking that the Trump administration is pushing to restore the pipeline’s permit to cross waterways in the Standing Rock area.

Aside from demonstrating solidarity against the project, the point of the action is to show Wells Fargo that investing in the Dakota Access Pipeline does not make businesses sense (the bill also takes issue with the bank’s phony account scandal). The city would likely be the largest account to divest from Wells Fargo over its pipeline investments, following the lead of individuals who started closing their accounts in the wake of the water protection actions.

The Seattle bill would also include social responsibility as a factor in deciding on which banks to work with going forward. That, of course, may prove difficult, since so many competing large financial institutions have their own problematic investments and behavior. But if regular people, companies of all sizes and public institutions start demanding socially-responsible investing from their banks, perhaps that will change. At least that’s the theory.

But more immediately, if pressure is high enough perhaps Wells Fargo will drop their stake in the pipeline, a financial hole that could stop the project entirely.

The city is also working to support state legislation that would give Seattle more leeway in choosing a bank, such as allowing city banking business to go through credit unions or maybe even someday create a public bank.

These are all good efforts by the city, and they are only happening thanks to strong leadership from communities on the ground at Standing Rock and the many people here at home who support them.

Of course, there’s an additional way to work against the business models of Dakota Access, Keystone XL and other major oil projects: We can use less oil. Seattle has the plans and the power to divest from one end of the balance sheet and reduce demand at the other.

Of course, reducing oil use is far more complicated than changing banks, both for individuals and cities. And just like moving your personal bank account only moves Wells Fargo’s bottom line by a minuscule fraction, your bike trip to the grocery store or bus ride to work is only a tiny drop saved from the global oil market.

Let me be clear, riding your bike is not going to stop the Dakota Access Pipeline. You should also get involved with ongoing efforts at Standing Rock and here in Seattle.

But it’s important to note how causes intersect and can support each other. This pipeline directly impacts the Standing Rock Sioux, while global climate change caused by the burning of that oil will hit many indigenous communities across the globe especially hard. Oil continues to be sold and burned due to systemic structures that support more oil burning, including government support of pipelines despite clear opposition from people impacted.

Many of those same structures are responsible for the 38,000 people killed and 4.4 million seriously injured by traffic collisions in the U.S. in 2015 alone. Past and ongoing investments in car transportation at the expense of all other options traps many communities in car dependency.

But Seattle has a chance to work together to dramatically reduce our city’s contribution to the global oil demand. And there are many other cities in the U.S. that can do the same.

Burning oil in motor vehicle engines is responsible for the majority of Seattle’s total greenhouse gas emissions, according to the city’s Climate Action Plan. The total is so big, that one person’s choice to stop driving or drive less is hardly going to make a dent even in Seattle’s total oil consumption. 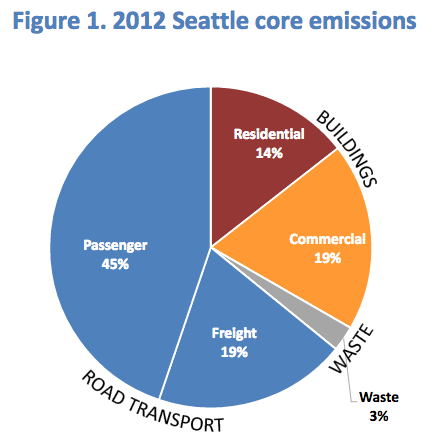 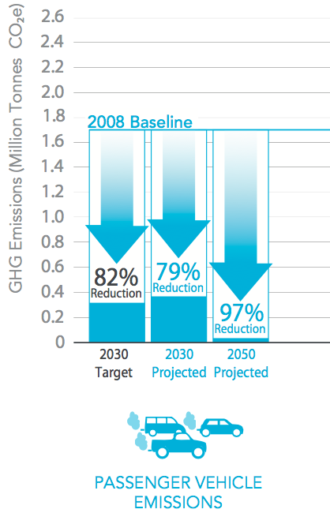 But a popular movement away from burning oil — supported by planned-but-not-assured citywide investments to make it safer and more convenient to choose other options — would have a giant impact. The Seattle Climate Action Plan (PDF) estimates that fully investing in the city’s biking, walking and transit plans as well as building walkable, transit-oriented neighborhoods could decrease passenger vehicle emissions by 82 percent by 2030 compared to 2008.

An 82 percent drop in oil demand from a major population center could make a dent in the already shaky pipeline finances. A similar drop in demand from many cities would make a huge dent.

And hey, we would make Seattle a safer city with cleaner air and lower transportation costs while we’re at it. Those are some nice side effects.

A lot of bicycle advocacy in recent years has moved away from using climate change as a central talking point. On one hand, I get that, especially in places where the politicians needed to approve investments in trails and bike lanes are not going to attach their names to anything with “climate change” on it. Building trails is still good for non-motorized transportation even if the words “climate change” aren’t on the bill funding them. And there are a lot of conservatives who bike and would support safe streets and trails, but are not interested in helping Democrats get policy wins. Politics is hard.

There’s also a hesitancy to talk about climate change on a personal outreach level. You cannot and should not guilt people into biking. It’s a bad tactic. It will either make people feel resigned to failure each time they drive, or it will make people respond with hostility (“You think you’re better than me because you ride a bike?”). These are both bad outcomes.

And, of course, you cannot know the specifics of everyone’s lives and why they are choosing to drive. Everyone chooses to get around by whatever mode makes the most sense for their lives for their uniquely different reasons.

But all these arguments aside, the truth is still clear: We need to burn less oil. The climate and the Dakota Access Pipeline business plan don’t care about why people are burning all that oil. And biking is one part of the solution.

You have an oil pipeline right outside your house. It’s probably lined with pumps. If you want to protest a pipeline, start here. #DAPL pic.twitter.com/AeW6FAFWWE

12 Responses to Seattle should divest from Dakota Access Pipeline, and we also shouldn’t buy the oil they’re trying to pump