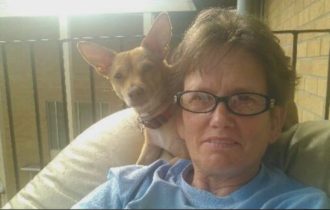 Friends, family and neighbors will gather tomorrow (Saturday) morning to remember Nellie Yelli, 62, who was killed Sunday while walking in a Green Lake crosswalk.

The memorial, organized by Seattle Neighborhood Greenways, begins 11 a.m. at 82nd and Wallingford Ave N, the intersection where she was killed. More details are available on the event page.

Treza Hafzalla, 27, was charged Thursday with Vehicular Homicide and Felony Hit and Run. Hafzalla allegedly failed to yield to Yelli, who was halfway through the crosswalk when Hafzalla struck her with her GMC Jimmy. Yelli died at the scene. Police found Yelli’s grocery cart stuck in the grill of Hafzalla’s SUV, according to the charging document.

Hafzalla allegedly called her boyfriend after parking her SUV a mile from the scene. But instead of taking her home, he drove her back to the scene where she was arrested. Hafzalla is suspected of DUI, though blood tests were still pending as of the time charges were filed.

On Sunday evening, Jan 1, Donelle “Nellie” Yelli was allegedly killed by an impaired driver while crossing Wallingford Ave N & N 82nd St in a marked crosswalk. An excellent profile of her was run on KOMO at http://komonews.com/news/local/beloved-mother-hen-at-greenwood-group-home-killed-in-seattle-crash

Donelle “Nellie” Yelli, 62, lived at Greenwood House, a home for women in need sponsored by the Low Income Housing Institute, where she was known as “the mother hen” who kindly took others under her wing. Her death was particularly poignant; she was a caring person living in a shelter. She is survived by her son, Michael McIntosh.

Please join us in gathering this Saturday Jan 7 at 11:00 AM at the corner of N. 82nd St. & Wallingford Ave N where she was killed.

Seattle Neighborhood Greenways runs a Memorial Walks program and has done more than 20 advocacy actions following fatalities of people walking and biking – only with the full support of the family of the victims. This is the first fatality Seattle Neighborhood Greenways has been involved with since they began placing white silhouettes in honor of all traffic fatality victims

Traffic violence disproportionately impacts low-income people. For the first time, the simple Seattle Neighborhood Greenways white silhouette and the 11AM event this Saturday will take on a more powerful role of both memorial marker and remembrance.

The advocacy action for this particular fatality includes a request for Washington State DUI legislation to be strengthened and enforced.

There is no money to pay for her funeral or burial. Her family is working on crowd-funding for funeral expenses. A link to the crowd-funding site will be provided later.

Pastor Nick Steinloski from Bethany Community Church will say a blessing for her life.