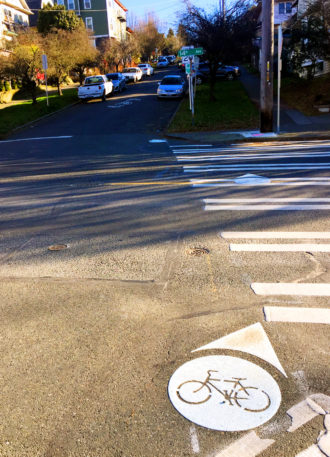 One of the relatively few 2016 bike plan projects completed on schedule, the underwhelming Columbia St neighborhood greenway is not likely to have much of an impact on bike mobility in Seattle. Pictured: The route’s odd crosswalk swerve at 14th Ave.

The biggest story for biking in Seattle in 2016 can be summed up in one terrible word: Delayed.

Not only did the revised plan include fewer miles of protected bike lanes and neighborhood greenways, but the projects it did include failed to complete the most-needed connections in the city. Downtown and the south end were particularly hard hit.

To advocates who had worked so hard to pass Mayor Ed Murray’s transportation levy based on promises of bold action on safe streets, the revised plan was a slap in the face. Dozens of people, organized by Seattle Neighborhood Greenways and Cascade Bicycle Club, protested the cuts by holding a rally at City Hall.

Rallying around the phrase “We can’t wait,” protesters made the case that the city has the plans and funding needed to take bold action to improve safety on our streets and stop fatal or injurious collisions before they happen. The time for waiting is over, they said.

The city chose to wait. The miles of planned protected bike lanes and neighborhood greenways for 2016 were cut by 35 percent, then the city failed to deliver half of the projects that remained in the slashed plan before the year ended.

To illustrate the point, here’s how the 2016 plan looked in spring of 2015 (note that in this version of the plan, Westlake, Roosevelt and Dearborn were completed a year earlier. The Pinehurst Way NE bike lane was completed in 2015, a year early): 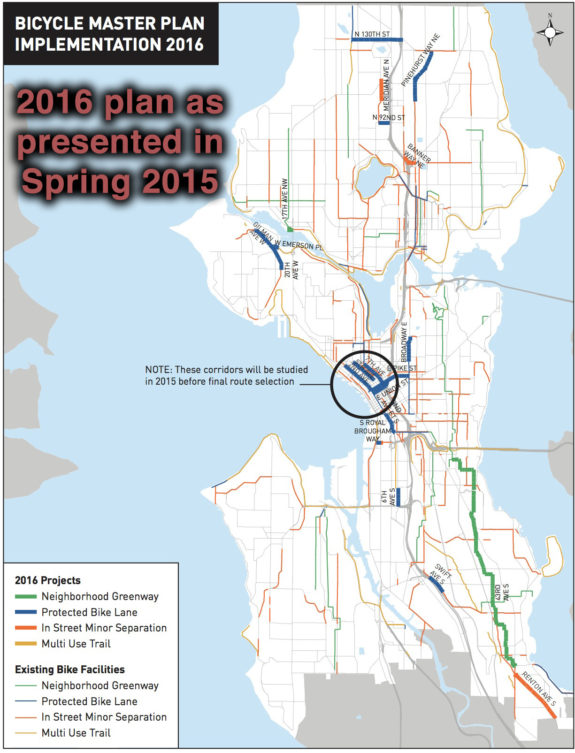 Then here’s the dramatically-cut version released in spring 2016: 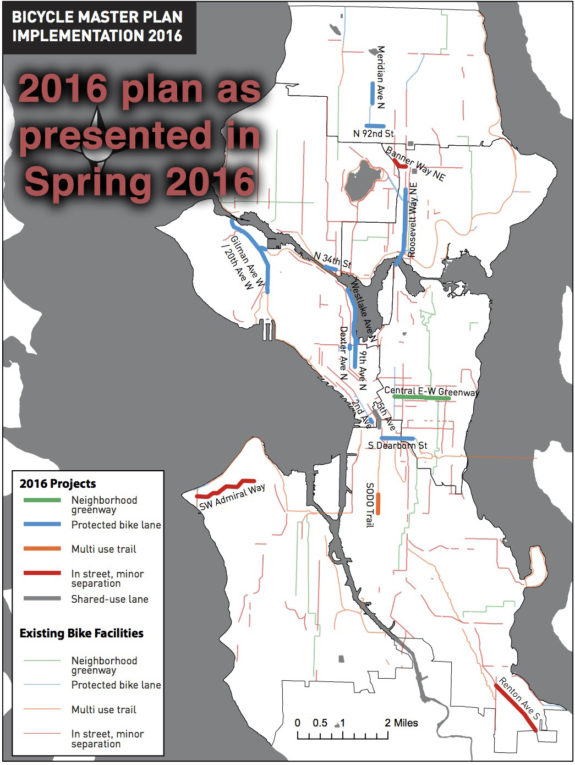 And here are the projects in the spring 2016 version that are not complete as of New Year’s Day 2017 (note that the two northernmost projects are in construction): 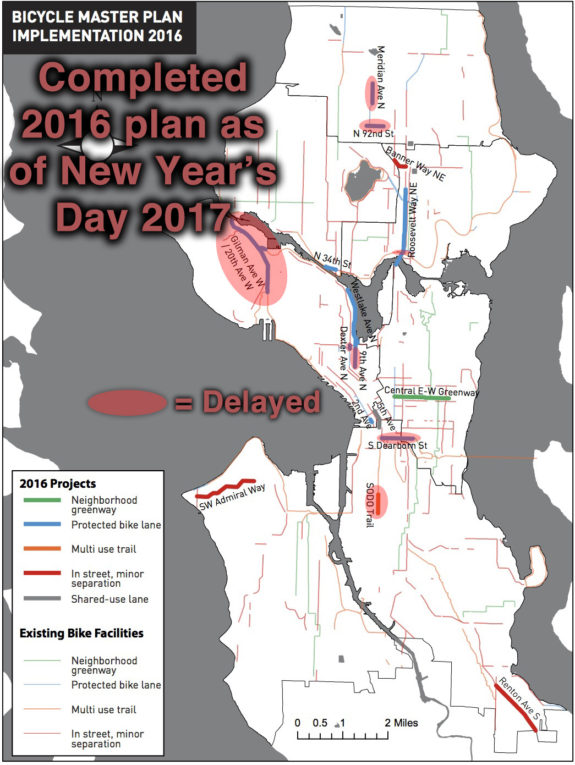 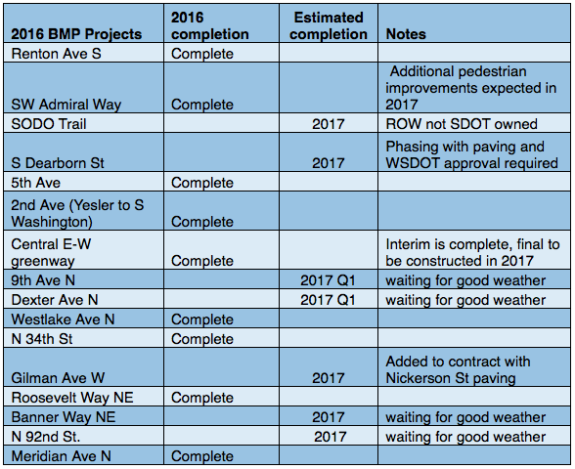 Some delays are going to happen. That’s just how public projects go. But the city acknowledges that it failed to have other projects designed and ready to take the place of delayed projects.

2016 originally had few neighborhood projects because the year was going to focus on finally creating a connected skeleton network of protected bike lanes downtown. This was a great plan, which had hosted a very positive and well-attended open house in summer of 2015 and was politically primed to ride the wave of popular support from the Move Seattle vote.

The mayor and SDOT broke this promise.

As of January 2017, the Center City Mobility Plan has been rebranded the “ONE Center City Plan,” and there are still no plans to build the downtown bike network beyond a previously-planned (and genuinely awesome) Belltown extension of 2nd Ave and a delayed section of 7th Ave (which is good, but only serves one direction and won’t connect to 2nd Ave or Broadway).

“Other key corridors are being incorporated into options the ONE Center City Plan will share this spring,” said SDOT spokesperson Norm Mah when asked about the downtown bike network delays. “We anticipate meeting our five-year goal of delivering a network by 2020, pending funding availability.”

But it wasn’t originally a five-year goal, it was a one-year goal. And that year just ended.

Perhaps it’s worth rereading this paragraph from our April 2016 post on the bike plan cuts:

Does the mayor really want to delay these projects until he’s running a campaign? And if these projects get delayed even further than that, all the people who worked their asses off to help pass Move Seattle aren’t going to show up to support leaders who dropped the ball.

The delays in 2016 have now put Mayor Murray on the spot. He either needs to take bold action on safe streets downtown during an election year or risk losing the safe streets movement’s support in November. Seattle needs a mayor who is ready to take action to make streets safer and connect the city’s fragmented bike network.

In other words, he’s on the verge of fucking it up.

But as Murray himself proved back in 2014, it’s not too late to get back on track. We need year-one Mayor Murray, who lit a fire under SDOT and delivered the 2nd Ave protected bike lane in just six months. This effort revolutionized biking downtown and set the stage for a network of comfortable and safe bike lanes. But more than two years later it remains disconnected from all other bike routes in the city.

Mayor Murray can repeat that success in 2017. He could direct SDOT to connect 2nd Ave to Westlake, Broadway, Dearborn (and, thus, the I-90 Trail and southend bike routes), and the trail to West Seattle. These are all ambitious-but-achievable projects guaranteed to yield huge results.

But if he tries to push this work off another year, there are a lot of very active and engaged residents in every Seattle neighborhood who are still smarting from last year’s bike plan whiplash who will be looking for a leader who can follow-through.