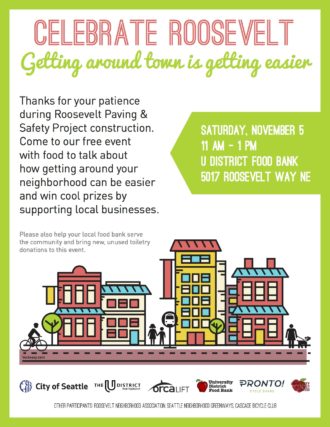 As we reported previously, it took a lot of advocacy work to convince SDOT to add a bike lane to Roosevelt Way NE as part of the recently-completed scheduled paving project. Seriously. And the result is a huge improvement over one of the most important bike routes in NE Seattle.

Sure, there are some issues with some of the intersections (they aren’t protected intersections), and there are growing pains with people parking in the new lane. But compared to the old skinny door zone bike lane, wow. It’s just so much less stressful and more inviting. Hopefully data will show that it is also safer and attracts new riders.

The city is hosting an opening celebration Saturday, 11 a.m. to 1 p.m. at the U District Food Bank.

Kidical Mass will ride 10:30 a.m. from the Tangletown Mighty-O Donuts to the ribbon-cutting. So biking parents, that’s the place to be.

Now, on to the next advocacy goal along this corridor: Connecting from the University Bridge where this project ends to downtown. The network is coming together. Slowly, sure, but it is happening.