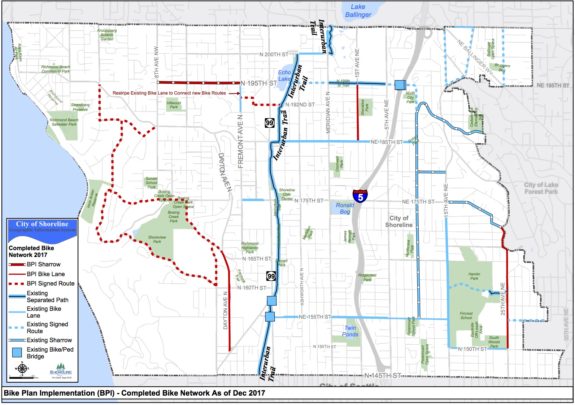 The City of Shoreline is set to make significant connections in its piecemeal bike network next year, and you can get a look at the changes and weigh in at an open house 5 p.m. Tuesday at Shoreline City Hall, Room 301.

Seattle’s northern neighbor has a lot of challenges for biking, many caused by an inconsistent street grid cut off by two major highways and some serious hills. But it also has some major assets, including the Interurban Trail that connects the south end to the north end of the city limits.

But too many homes and destinations remain disconnected from this major bike route and from each other. So it is great that the city is looking to make some significant changes in 2017. Let’s hope they keep this momentum going in coming years, as well.

In 2008, the City of Shoreline completed the Interurban Trail that runs north and south through the City. While this provides a valuable connection for users traveling north/south through Shoreline, it is missing connections to local neighborhoods, parks, city amenities and schools. The Bike Plan Implementation project will complete the majority of the City of Shoreline’s adopted Bicycle System Plan and Wayfinding Program. The Bicycle Master Plan contained within the 2011 Shoreline Transportation Master Plan includes these routes. See map for route alignments.

The Bike Plan Implementation Project will include work in all regions of the City. This work includes:

Founder and Editor of Seattle Bike Blog.
View all posts by Tom Fucoloro →
This entry was posted in news and tagged shoreline. Bookmark the permalink.