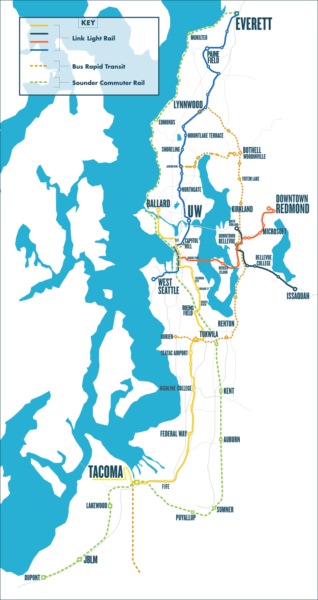 Don’t be one of those people who thinks their vote doesn’t matter because they are not in a Presidential swing state.

Today is the last day to register to vote online in WA if you want your ballot mailed to your home. Due to Indigenous People’s Day, you should also be able to mail in your registration form (PDF) so long as it is postmarked tomorrow (October 11). There are ways to vote if you miss this deadline, but they are all more of a hassle.

While I can’t imagine a vote that feels more satisfying than adding my lowly vote to what will hopefully be a mountain of WA votes against Donald Trump, there are so many other issues on the ballot this year that need your support, including a very rare chance to revolutionize public transportation across the region for generations to come.

Unlike with last year’s Move Seattle vote, Sound Transit 3 (Proposition 1) is a regional package with voters across King, Pierce and Snohomish Counties weighing in. It will only pass if Seattle and other transit-supporting cities and neighborhoods go very hard in favor of it.

Every vote will matter to overcome resistance from people like the GOP candidate for Governor Bill Bryant, who recently filmed a commercial where he is driving alone in a traffic jam while talking about how he thinks traffic sucks and that’s why you should vote for him. He doesn’t support regional Proposition 1 to expand transit and give people options around those traffic jams. He also doesn’t seem to see the irony in demonstrating the exact behavior that causes traffic jams: People driving alone.

His solution to traffic? More roads and wider highways, of course! And getting rid of toll lanes. Nevermind that trying this strategy for a generation has only made the problem worse. Clearly I-405 is just one more lane away from flowing freely.

Did I mention that if you register today, you can also vote against Bryant?

While on the subject, highway widening seems like an odd choice for attacking Governor Jay Inslee, who this very blog criticized for passing a huge highway expansion package in 2015. But at least Inslee isn’t going around saying, “I know we just passed billions for expanding highways, but now we need even wider highways!”

There are many more issues on the ballot, and we will dive into them in the weeks to come. But in the meantime, register to vote. And spread the word among your friends.

UPDATE: If you want to do more than just vote for Prop 1, my wonderful spouse Kelli at Cascade Bicycle Club is helping to organize phone banks to get out the vote:

Do you love light rail? Then join the @CascadeBicycle phone bank for @MassTransitNow tomorrow from 5:30 – 8 Sign up: https://t.co/S8QJaUWEnc

8 Responses to Last day to register to vote online! Regional transit needs you