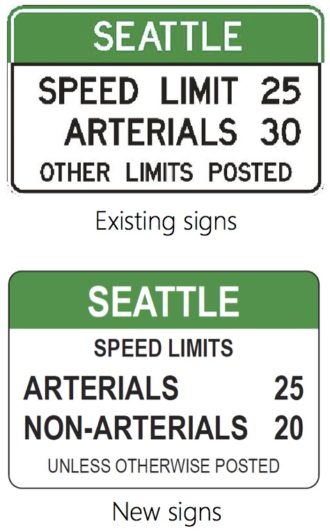 “It’s been something that’s very near and dear to my heart,” said Councilmember Sally Bagshaw, who wrote about the issue on her blog over the weekend. Councilmembers Tim Burgess and Mike O’Brien lead the effort on the Council in conjunction with SDOT’s Vision Zero leaders.

Seattle’s 30 mph default limit for busier arterial streets makes the city an outlier among other King County communities, so lowering that to 25 really just puts the city in line with the rest of the region. Streets with posted speed limits (nearly all busy streets outside the city center) will not be affected by this change.

The city initially signaled that they preferred to make the residential speed limit changes on a street-by-street basis, rolling out small 20 mph zones in various neighborhoods. But those efforts attracted very little attention, and it’s not clear how effective they were. Initial results showed little change in speed in these areas, according to the Seattle Times.

So will this change have an immediate effect on speeds? Perhaps. Certainly some people will adjust their driving habits, especially if the city does a good job advertising the change.

But more importantly, the change sets a new expectation for driving speeds in the city and makes it easier for the city to install traffic calming or make design changes to help behavior match the new limits. So the work is not finished. People still need to pressure the city to make actual, physical changes to dangerous and uncomfortable streets. And that busy street in your neighborhood isn’t going to drop to 25 without a serious push for safety changes. But at least now the city’s intention is clear.