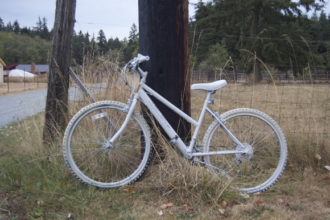 Photo from Occupy Your Bike.

Randall Lorraine was biking on East Harbor Road near Freeland in the south end of Whidbey Island one month ago. It was a Thursday about 9:15 p.m on this idyllic road in a beautiful corner of the world when David Hinton struck Randall with his Lexus and killed him.

Hinton was arrested on suspicion of vehicular homicide and DUI, the South Whidbey Record reports (paywall). In the past two years, three people have been killed on the island in suspected DUI collisions, according to a recent editorial in the Record (paywall).

Nobody should die while biking (or driving or walking) in south Whidbey Island. Especially off the highway, it is a peaceful place with low traffic and generally little sense of urgency. In other words, it’s a wonderful place to get around by bike.

Randall’s death has shaken the community. A group calling itself Occupy Your Bike created a ghost bike memorial in his honor. In a post about the memorial, it’s clear the group is still working through the loss:

Randall L. Lorraine, 58, of Langley was killed while bicycling home from work. Whether by choice or necessity, he commuted by bicycle instead of by car, truck, or bus. Some ride because they want the exercise or the quiet. Some ride because it makes financial sense. Some ride because it is one way to show they care about the environment and taking action on climate change. All bicyclists recognize the risks. Unfortunately for Randall Lorraine, the risk became real. He was struck by a car and died at the scene.

Words are easily forgotten. To raise awareness and to continue the inspiration, we created a ghost bike memorial that has been erected at the site. A reminder of someone who died too soon, and a reminder to keep it from happening again.

Our condolences to his friends and family. In his obituary, his family asked that donations be made in his honor to your local homeless shelter.

This entry was posted in news and tagged david hinton, occupy your bike, randall lorraine, whidbey island. Bookmark the permalink.