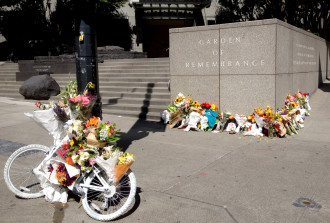 Seattle has settled a claim with the estate of the late Sher Kung for $3.5 million, the Seattle Times reports.

Kung was killed at 2nd and University in August 2014 just ten days before the dangerous paint-only bike lane on the street was upgraded to a protected bike lane. Though the person who turned the truck into her path had been texting around the time of the collision, he was not charged.

Kung was a new mother on her way to work as an attorney at Perkins Coie. She had already made a big splash in her young career by working on a case that helped overturn Don’t Ask Don’t Tell.

Some details of the settlement are confidential, the Times reports:

The payment resolves a claim that the city’s “failure to prepare an adequate traffic-control plan created dangerous conditions for bicyclists,” according to a claims list from the city’s risk-management division.

A check sent June 21 represents only its share of the settlement, which includes other parties, said Julie Moore, spokeswoman for the city Department of Finance and Administrative Services.

The city would not identify the other parties.

This entry was posted in news and tagged seattle times, sher kung. Bookmark the permalink.