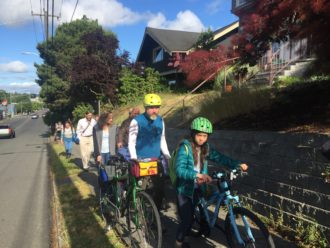 Standing next to the ghost bike painted white in memory of Andy Hulslander, Councilmember Rob Johnson (District 4) lamented that the city had not acted fast enough to make NE 65th Street safer.

“I stated [in my campaign] that we needed to take action before something like that happens again,” Johnson said. “Unfortunately, we missed that window.”

In May — ten months after Lucas McQuinn drove drunk and killed Hulslander at NE 65th St and 15th Ave NE — another man biking on 65th was critically injured in a collision with someone driving a Metro VanPool.

Yet the street remains dangerous, and neighbors are no longer content waiting for the city to get around to fixing it.

Around 60 people, including many children, joined an 8 a.m. walk and rally calling on the city to make the street safer for everyone. And they have a champion on the City Council in neighborhood resident Johnson. 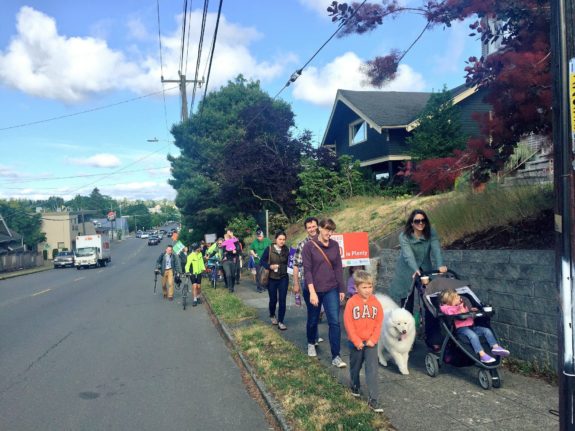 Photo taken at the height of the morning rush. There is plenty of space for safe bike lanes, better crosswalks and safer traffic flow.

The goal is for the city to put 65th on the fast track for safety improvements, perhaps as part of the Road Safety Corridor program that led the wildly successful remake of nearby NE 75th Street in 2014.

A man who drives a large truck for a barricade company saw the march and ran across the street to talk about all the dangerous driving he sees regularly on the street (particularly people passing on the right). He wanted to know how he could get involved (start by signing the petition at fix65th.org). 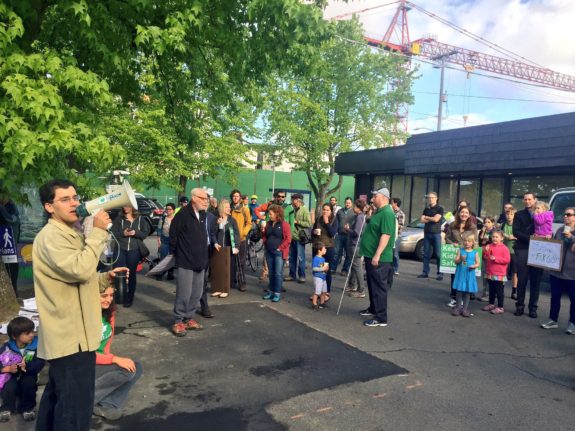 Andres Salomon on the bullhorn

A modern redesign of the street could fix so many of the street’s dangerous problems, and it might not even require a lot of funding or time. Paint, reflective plastic posts and some planter boxes or cheap curbs could be nearly all the city needs to transform the street for all users, at least in the near term. Neighbors need safe crosswalks at the many unsignalized intersections, people biking need protected bike lanes, and people driving need clear and obvious lanes. 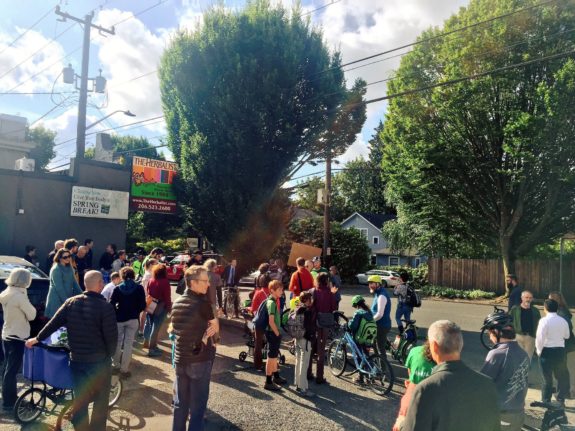 Businesses on the street are also significantly hampered by the dangerous street. People just don’t like to spend time in uncomfortable spaces, and NE 65th Street is unnecessarily uncomfortable. If people could walk across the street easily or simply hop on their bikes to patronize local shops, it would be a boon for businesses. This street is surrounded by homes within what should be easy walking and biking distance. A compete street would make this into more of Main Street for Ravenna instead of a divider.

But it’s not too late to help the 68people who will otherwise be seriously injured or killed in the next three years.

15 Responses to Neighbors march for a safer NE 65th Street