The famed DENNY bike won’t go into production after all 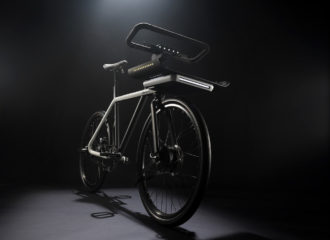 In 2014, the internet was abuzz about a handful of creative, forward-thinking and sometimes very strange bicycle designs from five U.S. cities all competing for the Oregon Manifest Bike Design Project. The prize: Fuji Bikes would put the winning design into production. That’s a big prize.

Sure, the handlebar lock and turn signals were a little strange. And the brush fenders, well, I’m not so sure about those. But the video for it was very cool, and I’m a sucker for a sleek front rack and integrated, automatic lights (I wish this were standard for city bikes). So the surprising number of online fans waited eagerly for it to go into production in 2015.

Seriously, I can’t tell you how many people emailed, tweeted and facebooked me about this bike.

Well, after a year of delays, Teague and Sizemore announced this morning that Fuji will not be producing the DENNY after all.

“We have recently come to realize that the production of this bike would be extremely hindered by regulations, available technology, and beyond the grasp of our manufacturing resources,” Sizemore wrote on Instagram. “Long story short, the Denny wouldn’t be the Denny any more.”

This comes as a huge bummer to the team, who say they were willing to compromise on many elements in order to get it to market. But after two years of work, Fuji apparently doesn’t see the coin in producing such an unusual bike. From Teague:

It’s with heavy hearts we announce that the DENNY bike will not be moving into production.

In 2014 TEAGUE took on a challenge to design and build the bike of the future. The DENNY bike went on to win the Oregon Manifest Bike Design Project, and the ultimate prize: a production run sponsored by Fuji Bikes.

Fans from more than 150 countries across the globe cast their vote for DENNY. After winning, the most important thing to us was collaborating to produce the bike that you voted for—a bike for the people, voted on by the people.

The DENNY bike won the Bike Design Project because it offered the very features that avid and would-be bicycle users want that the cycling industry doesn’t currently provide. Throughout the process we were prepared to compromise on features, so long as the production bike remained true to the spirit of the original DENNY concept. Unfortunately, because some of the DENNY features were so innovative and pushed what is possible to produce today on so many levels, manufacturing restrictions have made mass production, at this time, impossible.

We, along with our partners—Fuji and Oregon Manifest—put our heart and soul into this project. After two years of development, to say we’re disappointed would be an understatement. We also know this is a huge disappointment for DENNY fans, and for that we’re sincerely sorry.

Challenging the status quo is the only way to spark change—it’s our hope is that the legacy of DENNY will carry forward in future products that make cycling an easier choice for potential riders.