Amazon abruptly fires its Seattle bike couriers, will try to drive packages instead 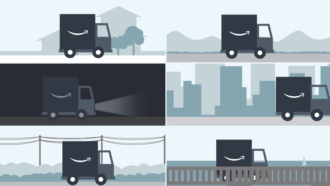 Amazon has fired dozens of bike couriers with little warning, apparently planning to deliver one-hour and two-hour Amazon Prime Now packages by driving in Seattle traffic instead. Good luck with that!

Needless to say, many of the couriers who just got fired are angry and worried about making rent, the Stranger reports. (Bike courier contractor US Dispatch advertised some of these job openings on this blog)

Seattle was apparently somewhat unique for having Amazon bike deliveries (though at least New York also has/had Prime deliveries by bike), according to Geekwire:

Industry insiders estimate that the move will affect about 60 bicycle couriers who carried packages for Amazon’s one- and two-hour delivery program in the city. One contracting firm told couriers in an email that the bike delivery program in Seattle was an exception, and that Amazon’s shift to full vehicle delivery was intended to create a more uniform process for its Prime Now cities.

This seems like a mistake for so many reasons. Bike delivery is a fast, pollution-free, low-congestion way to move goods relatively short distances. It’s a brilliant option for a service like Prime Now, which focuses on serving dense urban areas.

Shifting all this work to vans also means more traffic and more loading zone use. That’s not only bad for other delivery drivers who need those spaces, but it seems rather expensive to pay drivers to sit in traffic or circle city blocks looking for a parking spot. As one courier told the Stranger:

The courier I spoke with believes the e-commerce giant may come to regret the decision. She said she often picked up goods from Amazon cars stuck in downtown traffic in order to meet one-hour delivery deadlines.

For a company that has received so much attention for its ridiculous delivery drone idea, it’s strange that they are dropping an actually functional, low-impact way to move goods around dense neighborhoods.

This decision comes as the city is developing a Freight Master Plan that includes a section about the growing trend of more, smaller shipments throughout the city and cites Amazon by name, noting that “delivery of products using bicycle fleets has also increased in cities, allowing fast and reliable service where vehicle congestion hinders truck movement.”

This entry was posted in news and tagged amazon, bike couriers, geekwire, the stranger, us dispatch. Bookmark the permalink.

16 Responses to Amazon abruptly fires its Seattle bike couriers, will try to drive packages instead