EDITOR’S NOTE: This is the second of two guest posts by Seattle Neighborhood Greenways this week. Their map conceptualizing the connectivity potential in the city’s bike planning is brilliant. If you like this vision or are frustrated by the city’s recent bike plan cuts, be sure to check out the calls to action at the bottom for Tuesday.

Just looking to help make a difference? Jump to the call to action!

In Part 1 of our story, we left Tim wondering how to commute by bike with his baby daughter and left Shirley stranded with her children trying to cross Seattle’s most dangerous street, Rainier Ave S. In Part 2, we explain how to rescue them.

The city has a good plan.

Seattle’s Bicycle Master Plan is a 20-year plan (2014-2034). The plan “Proposes a network of bicycle facilities throughout the city that provides a way for people of all  ages and abilities to travel by bicycle within their neighborhoods, from one neighborhood to the next, and across the city.” The plan’s performance targets include quadrupling the ridership by 2030, getting to zero traffic fatalities by 2030, and having “100% of households in Seattle within 1⁄4 mile of an all ages and abilities bicycle facility by 2035.”

Unfortunately, when it has come to implementing the bike plan, the public feels the city is falling short. Much has been written about the implementation plan already (Stranger, Seattle Bike Blog, CHSBlog, etc), but to recap why people are disappointed:

So what would a robust implementation of a bike network look like?

Our city is growing fast. Our urban villages, the places our city has designated to grow the fastest, desperately need better transportation connections. We must build a network of trails, protected bike lanes, and neighborhood greenways that link our fastest growing neighborhoods together. We must provide safe, time competitive, and comfortable routes that entice people of all ages and abilities to try biking for some of their daily transportation needs.

Here’s a purposefully-not-to-scale concept map of a connected bike network that links all of Seattle’s Urban Villages (PDF): 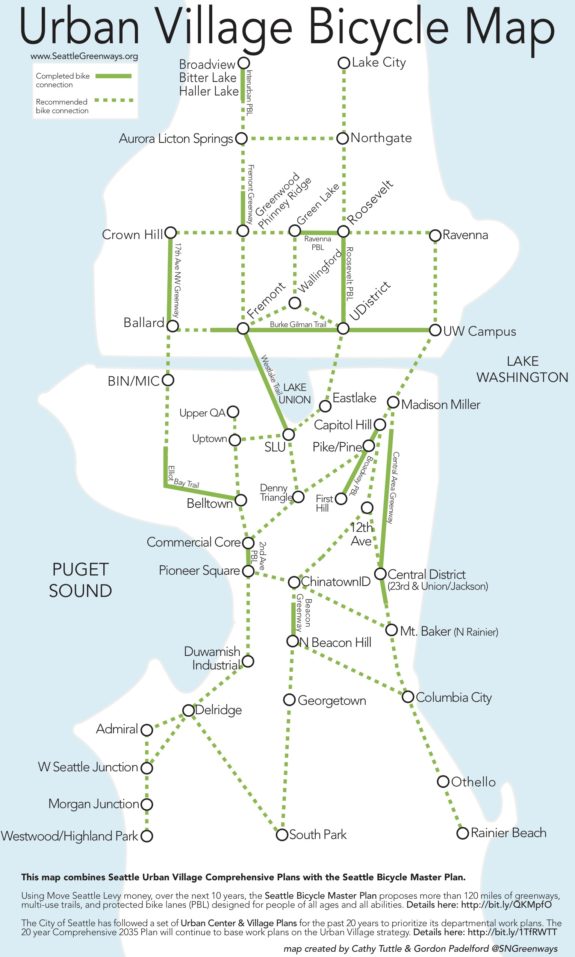 Using Move Seattle Levy money, over the next 10 years, the Seattle Bicycle Master Plan proposes more than 120 miles of greenways, multi-use trails, and protected bike lanes (PBL) designed for people of all ages and all abilities. Details here.
The City of Seattle has followed a set of Urban Center & Village Plans for the past 20 years to prioritize its departmental work plans. The 20 year Comprehensive 2035 Plan will continue to base work plans on the Urban Village strategy. Details here.

We can build this. This represents about 60 miles of high quality safe routes for biking, the same number of miles the Move Seattle Levy promises over the next five years.

You can make a difference! Here’s how:

Take Your Bike to Lunch Day at City Hall

What: RSVP to testify on Tuesday at 2 p.m. at the Seattle City Council Transportation Committee to let them know we can’t wait for safe streets. Cascade will help you sign up to exercise your democratic rights to speak to our elected leaders.

Really fired up? RSVP for both!

Let’s go. Take Your Bike To Lunch Day at City Hall on Facebook