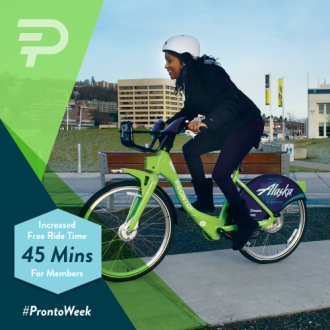 Image from a Pronto press release

For the cost of three bus rides, you can ride Pronto Cycle Share for a month.

For the first time, Pronto is offering a monthly payment option rather than paying a lump-sum for a whole year. Especially for people on a tight budget, the $7.95 monthly payments are much more accessible.

You can now get unlimited biking for an entire month for less than the cost of Netflix.

And if you buy your membership during Pronto Week May 2 – 8, the cost drops even more: Only $6.25 per month or $63 for a year. (Note that you have to commit to a year in order to get the monthly rate, and this deal is only for new members.)

SDOT Director Scott Kubly once joked that a bike share member who uses the system often might make their money back through reduced wear on their shoes. And if you live, work and play mostly within the limited Pronto service area, that might actually be true.

If you are a Pronto super-user (or want to become one), you can join this Pronto-only Bike Everywhere Challenge team and start logging your trips.

But maybe the bigger news for members is that starting May 2, you will get 45 minutes of free ride time per trip. Since Pronto launched, the free ride time has only lasted 30 minutes, which is not enough time to get from one end of the service area to the other (well, unless you are really hauling ass, which is not the point of bike share).

The extra 15 minutes will be especially helpful for people trying to bike between the U District satellite cluster and the primary system downtown and on Capitol Hill. You may even have time to make the trip via Westlake/Dexter and the Fremont Bridge instead of Eastlake if you prefer.

In its first year, about a third of Pronto members bought their memberships between May and September. One unforeseen problem with launching in October is that all those founding memberships came up for renewal right as the rainy season started, which is not the best time to sell an $85 bike pass. If you are one of the 1,200 or so people who let their memberships lapse over the winter, now’s the time to renew. You now get the added benefit of paying monthly if you prefer.

After signing up for the new BMW ReachNow car share service, I found myself wishing Pronto had such a simple-to-use mobile app for buying and managing memberships. I’m sure such an app is more expensive to develop than I’m imagining, but it took only a couple painless minutes to register to drive a BMW (including a weird ID scan and selfie process to confirm my identity). If registering for a bike share membership were at least as quick and easy, I bet a lot more people would make the jump on board.

Of course the best way to get more Pronto users would be to link bike share and ORCA transit cards. How cool would it be if you could just transfer from a bus or train to a bike?

But every time I mention this to anyone who has had experience with the ORCA bureaucracy shudders at the thought of trying to squeeze bike share into its tense web of inter-agency revenue sharing deals. Is this a good excuse? Of course not! That’s taxpayers pay bureaucrats: To bureaucratize! But in the meantime, Pronto is left selling its own memberships.

The latest system changes come after a rough couple of months for the young bike share system. The service and SDOT leaders got picked apart under a microscope while the City Council deliberated for several months over whether to save it or let it die (Spoiler: They saved it). But hey, there’s no such thing as bad publicity, right?

Well, it’s not over. SDOT Director Kubly is under investigation for possible ethics violations related to Pronto. Though the alleged violations that have bee made public so far aren’t exactly bombshell accusations, they are eroding trust in him, the Mayor’s Office and Pronto. His past work experience with Alta Bicycle Share (later bought by Motivate, Pronto’s operator) was publicly disclosed and even praised when he was hired, but it appears he did not properly file a mandatory disclosure waiver. Kubly apparently tried to respond to the ethics waiver questions, but emailed his responses only to himself rather than the Mayor’s legal counsel (Lorena González, who left shortly after to successfully run for City Council), the Seattle Times reports.

It does not appear he benefited financially from any of this (he says he has no financial stake in Motivate, Pronto’s operator), and he certainly didn’t lie about his previous employment with the company. And even more, the City Council has set up the contracting process so he would not have a hand in selecting the company that wins the proposed expansion bid. Only in Seattle would such a violation of the Process™ draw calls for him to be fired so quickly after voters resoundingly backed his transportation vision by voting for the Move Seattle levy. At least give the guy a chance to deliver.

But regardless of Kubly’s troubles, Pronto needs to rebuild its image as a fun, affordable option for getting around town and connecting to transit. Though it seems like a simple idea on its face, Pronto is actually a pretty impressive and intricate operation that can be a deceptively powerful transportation tool.

There’s nothing quite like the feeling of rolling up to a dock near your destination, hearing the beep that tells you the bike is locked and walking away as though you never even rode a bike at all. No worries about returning to get it later or concerns that someone might steal it. You’re free to bus back, hop a train, get a ride from a friend or simply walk if you want to. It’s true transportation freedom. Now let’s expand it to more of the city.