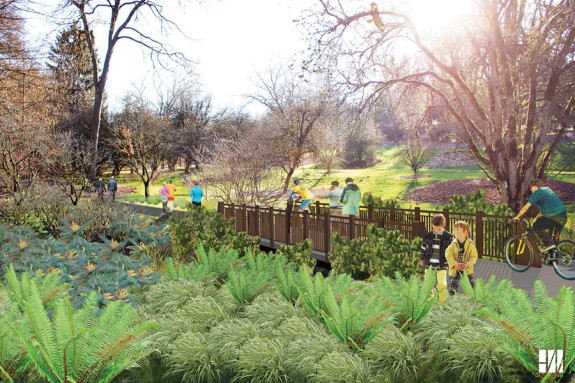 Construction is set to begin Monday on a new trail along the western side of the Arboretum, providing a safe space for walking and biking next to Lake Washington Blvd and improving access to more of the Arboretum grounds.

Kicking off a year later than planned in early 2015 (PDF), construction on the $7.8 million trail is expected to take more than a year and a half, opening for use in December 2017.

But it will also become a popular bike route that connects to the new trail across the 520 Bridge (also opening in 2017) and to UW Station/the Burke-Gilman Trail via the Montlake Bridge.

With smart planning in the Montlake section of the 520 Bridge project, it could be possible to bike from the Burke-Gilman Trail to E Madison Street entirely on separated bike lanes and trails.

And if the city builds protected bike lanes on E Madison Street to the MLK junction, the new Arboretum Trail could connect to neighborhood bike routes into the Central District like the promising 27th Ave neighborhood greenway planned as part of the Madison BRT project. And since the 27th Ave greenway will connect to the existing neighborhood greenway on 25th Ave, which connects to the I-90 Trail and Beacon Hill and OMG EVERYONE IT’S ACTUALLY BECOMING A CONNECTED BIKE NETWORK.

Deep breath… alright. I got a little ahead of myself. First, crews gotta start work on the trail so it can be ready to ride by the end of 2017. Details from the construction notice (PDF):

On Monday, March 28, Ohno Construction crews will begin work on the new Loop Trail. Construction is scheduled to run through December 2017. The Arboretum will remain open during construction. Users will be re-routed around the construction activities via notifications and signage for the project duration. Construction can be disruptive, and we appreciate your patience as we improve the Arboretum.

This entry was posted in news and tagged arboretum, arboretum trail, wsdot. Bookmark the permalink.