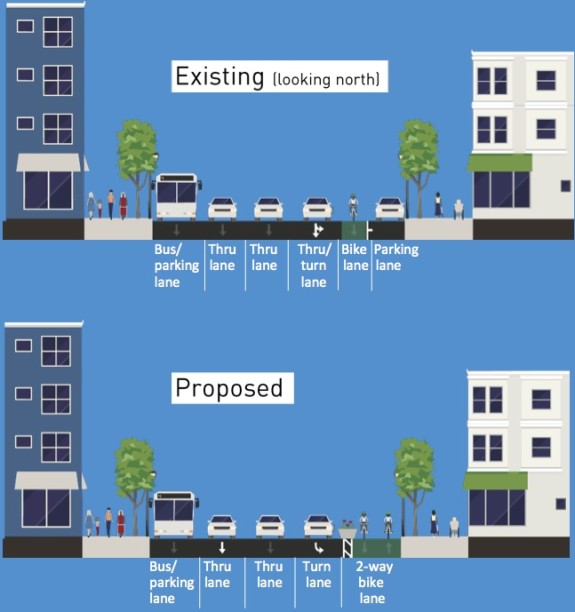 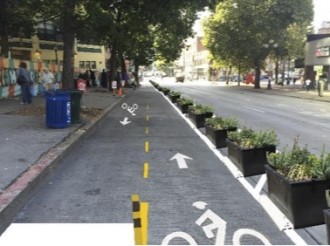 You may have noticed crews out painting what appears to be the first extension of the 2nd Ave protected bike lane since it opened in October 2014.

Your eyes have not deceived you.

Don’t get too excited, though, because it’s only going one block further to S Washington Street. But this is a rather important block, opening up connectivity to 5th and 4th Avenues to the west and 2nd Ave (not to be confused with 2nd Ave Ext) to the east.

But the bike lane still won’t have a complete and intuitive connection to and from the International District, a major need for the bike network.

The bike lane will also be protected from traffic by planter boxes instead of the reflective plastic posts we know so well. Those planters will also be added to the rest of the existing 2nd Ave bike lane by May. Hopefully the planters not only make the street a bit more attractive, but also prevent people from driving and stopping in the bike lane.

We already told you about plans to extend the 2nd Ave bike lane north to Denny Way “possible this year.” Well, the timeline for the project now says the city will put it to bid this summer, workers will begin construction in the fall and the bike lane will open in spring 2017.

The project includes three new traffic signals at Vine, Cedar and Clay Streets that have been needed for a long time. Work is also complicated by curb bulbs that will likely need some design changes, a factor the existing bike lane did not face.

Obviously, the faster the city can get this done the better. It’s particularly urgent that we create a connection to at least Blanchard and Lenora, which provide connectivity to other major bike routes. With the northbound 2nd Ave bike lane ending abruptly like it does today, spring 2017 feels very far away. Imagine if this segment opened before the two-year anniversary of the original bike lane… 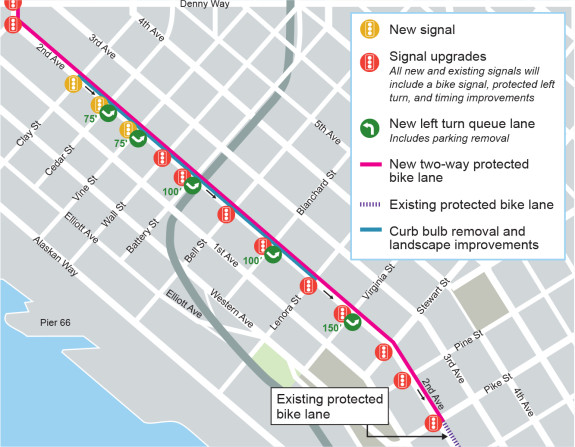