No longer on the chopping block, State looks to invest in the John Wayne Trail 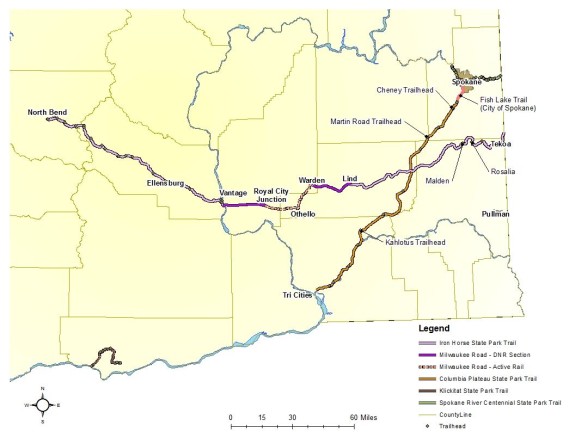 The movement to save and improve the state-spanning John Wayne Pioneer Trail (AKA the Iron Horse Trail) has turned out so strongly across Washington that rather than trying to give trail land away, Senate leaders are hoping to invest $100,000 into making it work better.

In a letter to supporters, the Tekoa Trail and Trestle Association (“TTTA”) celebrated the news, saying, “Friends we have turned the tide!” (You can support the group’s efforts financially via their crowdfunding campaign).

The funding — if it makes it through the rest of the budget process — would improve weed control along the trail, a common complaint by landowners who say the unkempt trail serves as a pathway for invasive and noxious weeds that harm their farm and grazing lands. Improving weed control is a step toward protecting and investing to activate this incredible asset in our state.

Meanwhile, the State’s Parks Department is in the midst of a planning project for the trail with public meetings scheduled today (Tuesday) in Cheney and tomorrow in Ellensburg to “gather information and comments from the public that will help lead to a long-term plan for the John Wayne Pioneer Trail. At these meetings, State Park staff will have a presentation followed by a breakout session to collect public comments on a range of trail-related issues, including noxious weed and vegetation management, trailhead and camping opportunities, fencing and trail-use permits.”

The message for Parks is clear: Make it easier for trail users to access the trail and invest to develop it into the incredible cross-state adventure and local-economy-boosting pathway it could be.

Meeting details from the TTTA:

More info from the TTTA:

We wanted to share with you the very best news that we have yet to hear. The 2016 Washington State Senate supplemental budget has allocated funds for the trail. The same trail that this very body closed to the public last year is now beginning to receive the proper management it is due from Olympia. Friends we have turned the tide!!

(3) $100,000 of the parks renewal and stewardship account–state appropriation is provided solely for conducting noxious weed treatment and vegetation management on the John Wayne pioneer trail to protect adjacent land owners from noxious weeds with priority in areas where there is adjacent agricultural use. Control of noxious weeds must follow an integrated pest management approach including the use of biological, chemical, and mechanical control prescriptions in accordance with chapter 17.15 RCW and consistent with state and county weed board requirements. The commission must report on its progress in meeting this requirement to the appropriate committees of the legislature by September 30, 2016.

Seven months ago Washington’s only cross state trail, the John Wayne Pioneer Trail, an epic trail that covers much of the breadth and beauty that our great state has to offer, had a 135 mile 6,000 acre stretch, closed to all except adjacent landowners. This was done behind closed doors without public knowledge or input. Fortunately a typo in their budget proviso nullified the land grab. The legislative team of the 9th District was going to correct that typo this session and give away this precious public asset once and for all, but you stopped those plans. After 35 years of not spending a penny to improve this portion of the trail, $100,000 for weed control marks a true and dramatic reversal of public policy.

You made this happen, Thank You.

Thank you for sending the emails, making the phone calls, driving the miles to attend public meetings. Thank you for hanging up posters, building web pages, baking trestle-cookies. Thank you for riding your horse on the trail, taking your dog for a walk and peddling through tunnels and over trestles. Thank you for writing letters to the editor, visiting the offices of legislators in Olympia, taking pictures and posting them. Thank you to the 16 cities that have passed resolutions asking Olympia to fund the trail not close it. And thank you for standing up at a microphone and shouting Save the Trail!!

In government when things first change with a long standing errant position, it’s a lot like a big dam bursting. First there’s that little chink in the cement and some justice trickles through. Then that same powerful and growing force that created the fracture will rupture the wall and that dam will crumble. You noble trail supporters are a mighty river of righteousness. But we must maintain that pressure, that force, that energy.

There is much more at stake now. In January of 2017 the legislature will be considering proposals requesting new funds necessary for large scale improvements to the trail including the repair of the Tekoa Trestle, improved gravel and grading, and the installation of trail heads and bathrooms. We ask for your continued support and involvement as we moved forward to lobby the legislature to repair the trail for all Washingtonians.

– Most Sincerely, The Officers of the Tekoa Trail and Trestle Association

6 Responses to No longer on the chopping block, State looks to invest in the John Wayne Trail