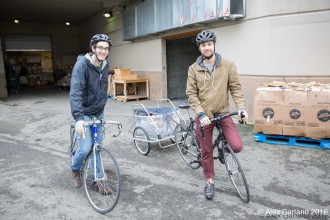 Our society wastes an astounding amount of food. Meanwhile, people in our own communities struggle with food insecurity or could use some help making tight budgets work.

That’s where Seattle Food Rescue comes in. Founder Tim Jenkins told Josh Kelety at Capitol Hill Seattle about the organization he founded to help connect fresh, perishable foods that didn’t sell at smaller grocery stores to people who could use some free food.

America has a major food waste problem. That’s why for the past two years Seattle Food Rescue—a small volunteer non-profit organization of mostly college students — has been biking to grocery stores around Central Seattle picking up excess consumable food and delivering the goods to food banks and community partners around the city. Now, Seattle Food Rescue is partnering with Capitol Hill Housing to bring groceries right to the doors of residents at several properties.

“In an ideal world, all the food waste would be diverted from landfills to people who need it,” said Tim Jenkins, founder of Seattle Food Rescue. “That’s where we’d like to be headed.”

“I really liked the food distribution model that was focused around bicycles,” said Jenkins. “So I took that model and brought it out to Seattle and I’ve been slowly but surely expanding it ever since.”

A few weeks ago, I asked the question: What can Seattle’s bike movement do to help end homelessness? Well, one way to help may be volunteering at Seattle Food Rescue, transforming your time and leg power into free food for people who could use it.

And if you know any grocery sellers who may be interested in donating to Seattle Food Rescue, have them email [email protected].