Every year, Allstate releases its “America’s Best Drivers Report,” which claims to rank our cities from best to worst. Seattle placed a dismal 184 out of 200 this year, our worst score yet. And every year, news sources in those cities eat it up.

Don’t listen to these haters, Seattle drivers. We here at Seattle Bike Blog wouldn’t trade you for drivers from any other American city. ❤❤❤❤❤❤

For example, when friends from my hometown of St. Louis, Missouri (Allstate’s 85th safest drivers in America) visit Seattle for the first time, I like to show them a magic trick: I start to enter a crosswalk and the busy traffic actually stops to let us cross.

Now, I know people don’t always stop — we still have to work on this, Seattle — but back in Missouri, essentially nobody ever stops. I’m pretty sure most people driving there don’t even know you’re supposed to stop for people in a crosswalk (for years I thought crosswalks were just to tell people where to cross, and I scored very high on the driver’s test). When people do stop, it’s more of a friendly courtesy thing than basic rule following.

And it’s not just crosswalks. When I’m on my bike in Seattle and I arrive at a traffic circle or four-way stop at the same time as someone driving, the person driving nearly always pauses to let me go first. This drove me crazy when I first moved here. “If it’s your turn, just go!” the Missouri driver in me wanted to yell.

But I’ve grown to understand that Seattle’s passive, deferential driving style is actually wonderful, especially compared to the alternative. A person driving defensively might annoy you, but a person driving aggressively might kill you. And most people in Seattle drive very defensively. I now show my appreciation with a big smile and wave.

I know, I know, anecdotes are not data, and the Allstate data appears to show that Seattle drivers suck real bad. Well, let’s look a bit closer.

Of course not! Unless you are an insurance actuary, this is a totally pointless way to measure driving safety. When it comes to the relative safety of drivers in different cities, there’s only one measure that matters: Deaths and serious injuries. Bent fenders can be fixed. Life and health is precious. 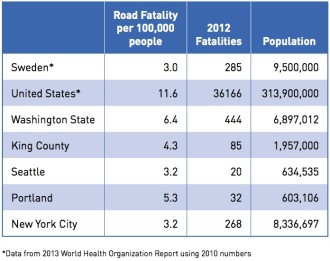 And by that measure, Seattle is among the best, especially for a big US city. In fact, a 2014 report ranks Seattle as the second-safest big city for people walking. The only city to rank higher was Boston, which conspicuously ranked dead last (#200) on Allstate’s list.

So what does Allstate consider the “safest driving city” in America? Kansas City, Kansas, a largely suburban city adjacent to the more urban Kansas City, Missouri. The five-year average traffic fatality rate in KCK is 10.5 per 100,000 residents (it was 6.8 in 2013, a particularly good year for the city according to City-Data.com)

As we reported previously, Seattle may have the best chance of reaching Vision Zero among all other major cities because we are starting from a much lower position. Seattle’s 4.2 death rate is still 4.2 people too high. It’s going to take a lot of hard work and road safety investments to reach zero.

But Seattle drivers should be aware that you are on the forefront of traffic safety in the US. You are partners in the solution to this enormous problem.

In fact, the term “Seattle driver” just feels so strange to write. Because people here aren’t defined by the way they get around. Most people in Seattle get around by different modes depending on the task at hand.

According to a 2013 Cascade Bicycle Club survey, 43 percent of Seattle residents ride a bike at least once a month, and only 22 percent said they never ride a bike.

When you walk, take transit or bike for many trips in your daily life, you see our streets differently than if you drive everywhere. And perhaps that’s why so many people stop at crosswalks or defer to people biking: They know that’s how they would want others to treat them.

I know getting back into biking as an adult dramatically changed the way I drive. You start to see streets as places for people walking and biking and driving and selling goods and waiting for the bus and otherwise being part of our city. Streets are not simply pipes for cars, and those people “in the way” are real-life people, not obstacles to fume over or honk at (though, of course, there are always a handful of total assholes out there who give Seattle drivers a bad name).

The biggest difference in traffic safety may have less to do with driving culture and more to do with the engineering of the streets themselves. So many of Seattle’s residential streets are too skinny for people driving in opposite directions to go at the same time. This means that the average driving speeds on many of our residential streets is already close to 20 mph. And as we know, speed is the single most important factor in avoiding serious injury and death on our streets.

But Seattle has gone even further, working to improve safety on our busy streets, too. Since the 1970s, the city has been conducting road safety projects that upgrade highway-style four-lane streets into city-style three lane streets with center turn lanes. Sometimes — though not always — these projects included bike lanes, which tended to draw most of the media attention.

Less reported, however, were the big increases in safety for people driving. From NE 125th Street to Nickerson to NE 75th Street and more, collisions dropped significantly on these streets while injury-causing collisions plummeted. So what may have been a deadly t-bone collision turned into a fender bender, and what may have been a fender bender didn’t happen at all. At the time, people called these projects a “war on cars.” The city is waging a very strange war if their strategy is to protect the enemy.

That’s why we pen this love letter to people driving in Seattle today. You’re my neighbor, and we’re in this crazy safe streets thing together. Your car insurance company may not love you, but we do.

This entry was posted in news and tagged allstate, america's best drivers report. Bookmark the permalink.