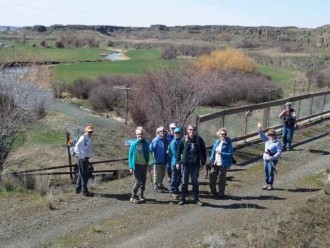 Hikers on the trail. Photo from the Tekoa Trail and Trestle Association

The John Wayne Trail appears safe from legislative giveaway, at least for now.

The Tekoa Trail and Trestle Association (“TTTA”) from the far east end of the statewide John Wayne Pioneer Trail (AKA the Iron Horse Trail) sent an email to supporters Tuesday announcing that Rep. Joe Schmick does not plan to reintroduce legislation that nearly gave away the state trail to adjacent landowners last year.

As we reported previously, that trail giveaway was attached to the Capital Budget and, therefore, did not go through the normal hearing and public process before getting passed. A typo in the law made it invalid, however, and delivered a wake-up call to people and communities who love it and dream of a more developed and usable trail someday. This includes Ted Blaszak, President of the TTTA and member of the Tekoa City Council. Blaszak has worked tirelessly on the issue in recent months, essentially organizing a campaign of urgent trail support from the ground up.

The series of public hearings on the trail in recent months, co-organized by the TTTA and Rep. Schmick’s Office, gathered feedback about the trail and got landowners and trail supporters in the same room. Some of the concerns about the trail have to do with inadequate weed control and illegal uses, including dumping.

Many of these issues could be helped if there were more users, but a lack of development of the trail, water access and a restrictive permitting process present significant impediments to use.

While many of the trail challenges will likely require significant investment, some issues can be handled without any budget. In particular, the TTTA has focused on removing the permit restrictions so people can use the state trail freely. And they also have some ideas for how you can get involved.

Details from the TTTA email:

We greet the New Year with good news! In a recent Colfax Gazette article, State Rep. Joe Schmick has stated he will abandon his efforts to close the John Wayne Pioneer Trail!

This is a cause for celebration. Just a few short months ago he was committed to correcting the typo that thwarted his previous proviso. Now, rather than hand over 6,000 acres of the only cross state trail in Washington to adjacent landowners, the John Wayne Pioneer Trail (JWPT) will remain open!

There is no doubt that the hundreds of people who attended recent public meetings, cohosted by both the TTTA and  Rep. Schmick, made it loud and clear, not just Tekoa, but the vast majority of Washingtonians want to keep their only cross state trail open.

This message was reinforced by the passage of 14 different city resolutions asking the state legislature to fund the trail rather than close it. These are: Tekoa, Spokane, Cheney, Rosalia, Lind, Palouse, Colfax, Pullman, Cle Elum, Royal City, Rockford, Latah, Ellensburg and Roslyn.

We cannot help but feel some disappointment however, as our victory was less than total. At these meetings a list of problems that the trail is suffering from were presented to Rep. Schmick, Rep. Dye and Sen. Schoesler, all of the 9th district legislative in which about half of the trail runs through. The meetings were timed so that they would have an opportunity to introduce a bill for the current legislative session for some trail improvements, which Rep. Schmick said he would consider doing. But instead they have chosen to take no legislative action at all, not even for any of the trail related problems that drove them to attempt to close the trail altogether in 2015.

On the other hand, we are encouraged that the State Parks Department has begun a process to solicit recommendations for better trail management, but Parks is limited in what it can do.

Legislative action is required to make many of the improvements the trail needs. In particular, the removal of the special JWPT permit requirements for people to use the trail.

Right now, there are signs all along the trail that say you must receive a special permit before you can walk or bike there. The permit is difficult to find and once you get it, 30+ large acreage landowners will be given your information by the state and these folks have been known to confront trail users they spot, demanding them to present their papers.

No other park or trail in the entire state of Washington has these type special permit requirements even though they are all adjacent to private land. Not on a beach, a mountain, or in any valley are WA landowners given such an entitlement that strongly discourages the public’s use of park land like they do here.

The permits can only be removed by an act of the legislature. Olympia needs to take action, and *now* please.

Our small town economies are being affected. Last year, Tekoa had three restaurants now we have two. We once had 3,000 citizens, now we are down to 843. We need the trail that runs by our town, it helps our small economy, it provides jobs and we do not need this type of legislative to make it harder for us.

Hence the officers of the TTTA have decided to continue to lobby the WA state legislature to make the John Wayne Trail to be more accessible.

4 things you can do to help now

Several Committee Captains will report their activities and solicit your input, including the committees of the Web Site, WA press, Natl press, Organization endorsements, Fund raising for trail completion, Litter patrol,    City Resolutions, and Trail ride plans for both horses and bikes. We will have these phone calls every two weeks (please see the attached calendar).

2. Join us in Olympia next week

The Parks and Great Outdoors Legislative Day — Thursday, January 28, all day (you must pre-register)

3. E-mail many state legislators particularly yours

4. Spread the word via social media, letters to the editor, whatever way you can think of

8 Responses to With John Wayne Trail seemingly protected for now, group from Tekoa outlines steps to make it great