SPD: How an officer recovered a stolen mountain bike in Cal Anderson 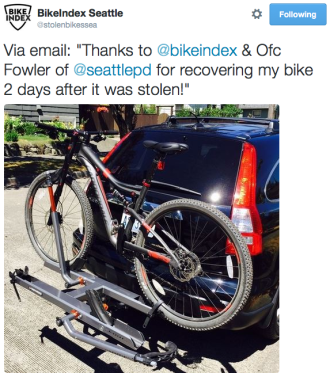 Seattle Police Officer Drew Fowler was on bike patrol in Cal Anderson Park Saturday when he spotted a high-end mountain bike in the hands of a suspected thief.

Officer Fowler stopped the man and asked if he could have a look at the bike’s serial number. The man let him, according to Seattle Police, and the officer found it listed as stolen on Bike Index.

The officer confiscated the bike and the suspect was arrested for possession of stolen property. The bike was reunited with its owner thanks again to Bike Index.

There are several lessons in this example of bike theft enforcement. First, it is very hard to get someone on bike theft, but much easier to get someone on the lesser crime of possession of stolen property. Even when someone has a stolen bike and a set of bolt cutters in his backpack (as with this case), it’s still impossible to prove he was the person who stole it without witness or video/photo evidence of the theft itself.

Second, there is a gray area in the stop and search phase. In this case, SPD says the man gave the officer permission to look at the serial number. But what if he had said no? Simply appearing “sketchy” is not (and should not be) cause for a search. Perhaps this is where Bike Index can help again. If an officer runs the make and model of the suspicious bike on their phone and finds a stolen listing, should that be enough cause for a stop and search?

Third, recovering bikes is awesome, so thanks to Officer Fowler for seeing this one through. How can we get more officers to use Bike Index and keep an eye out for stolen bikes? If enough people get arrested for possessing a stolen bike, will that make it a little less appealing to steal bikes to make a quick buck? Or even if not, at least more people will get their beloved bikes back, which is a good result on its own.

And finally, register your bike online. And if you haven’t already, record your bike’s serial number. It’s much easier and faster to match a stolen bike if you have that number. It’s also handy to have photos of yourself with your bike.

Two SPD bike officers put the brakes on a suspected bicycle thief Saturday after they spotted him walking a high-end Cannondale through Cal Anderson Park and pedaled over to chat him up about his bike.

Officer Drew Fowler, a long-time cycling enthusiast, asked the man about his pricey silver Cannondale, and became suspicious when the man said he’d bought it from a website for $400–about one-tenth of its retail value. 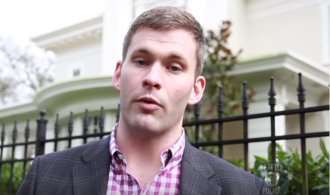 Officer Fowler (pictured right) and his partner Jose Silva asked the man if they could take a look at the bike’s serial number, and he obliged. Officer Fowler quickly signed up for an account on Bikeindex.org and discovered the bike’s owner had listed it as stolen.

After taking the man into custody for possession of stolen property, officers found a set of bolt cutters inside his backpack.

Officers booked the suspect into the King County Jail for investigation of stolen property and referred the case to mental health court.

With the help of BikeIndex, Officer Fowler was able to contact the Cannondale’s rightful owner and return the bicycle.

10 Responses to SPD: How an officer recovered a stolen mountain bike in Cal Anderson