Westlake lawsuit is over, bikeway set to open in the summer 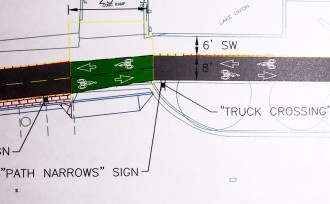 More details on the lawsuit “compromise” below

The Westlake bikeway lawsuit is over, and construction will begin soon on a two-way protected bike lane from the Fremont Bridge to Lake Union Park. If all goes according to schedule, the bikeway will open in the summer.

Mayor Ed Murray has once again brokered a deal to keep the project moving forward and out of the courts. A project that once appeared headed to the legal hell of the Ballard Missing Link is moving forward. It will be the first flat, direct and (hopefully) safe bike route between the city center and neighborhoods north of the Ship Canal.

But the settlement comes with a significant design change that will create a bikeway pinch point only eight feet wide, far below recommended standards and even further below best practices.

But first, some background

Already a popular bike route, the existing sprawling parking lot along the western edge of Lake Union does not work well for anyone. There is no clear route for people biking, so everyone chooses their own path. This makes walking, driving and biking in the area unpredictable and unnecessarily stressful. And, worse, people biking keep getting injured, often by people who pull out of a parking space into their paths.

The $3.6 million project is funded by a regional grant and local funds, but it encountered some fairly strong backlash from some businesses and residents along the lake. A group calling itself the Westlake Stakeholders sued to delay the entire citywide Bicycle Master Plan in late 2013, but later agreed to drop the suit on the condition that the city create a community design process. And they did.

The sometimes tense and drawn-out community design process went over the entire project inch-by-inch and parking-space-by-parking-space. After a series of major design compromises — some of which have angered bike advocates by squeezing the width of the two-way bikeway down to ten feet, below the recognized best practice of at least 12 feet — a design emerged that preserved 90 percent of the astounding 1,271 publicly-owned parking spaces in the parking area (including private lots, there are 1,712 parking spaces).

But it was a compromise, and it seemed that after so much hard work people were able to come together and work out their differences — or at least reach an agreement. Everyone gave a little. Parking was either preserved or the rules were rewritten to make sure remaining spaces are used to support businesses and residents, not as a free park-and-ride for downtown and South Lake Union workers. A complete and connected bike route was created, which will be a massive improvement even if it is a bit too skinny for the high number of people expected to flow freely (passing may be a bit difficult, especially during busy hours). Hands were shaken, a deal made.

Then came Nautical Landing. A self-described “superyacht” marina, Nautical Landing is a business to support only the richest of the rich. And they didn’t care about the community process or all the compromises made on both sides. They sued to stop the project, anyway. It was a slap in the face of everyone who dedicated their time to crafting a compromise. And it was a slap in the face of Mayor Murray, whose office worked so hard to broker the deal between all the different interests in the area.

In the end, Nautical Landing didn’t want to lose a handful of city-owned parking spaces in front of their marina by turning perpendicular parking spots into angled parking (the horror!). And they also argued that splitting the bikeway at their driveway would be dangerous because they have to back up trucks into their driveway, though there seems to be little evidence of that danger. But it doesn’t really matter. They had the money to sue to circumvent the process, so they did. And they got their way.

Below is the area in question. The driveway on the top-left of each image leads to the marina. The sidewalk area next to the greenery is actually a bridge over the lake, though it doesn’t look like it. That structure makes it much harder, more expensive and more lawsuit-vulnerable to simply widen the sidewalk enough to maintain a ten-foot bikeway. The original plan was to split the bike lanes and route one direction into the current parking area. But Nautical Landing didn’t want that. So instead, we get an eight-foot bikeway for a short stretch: 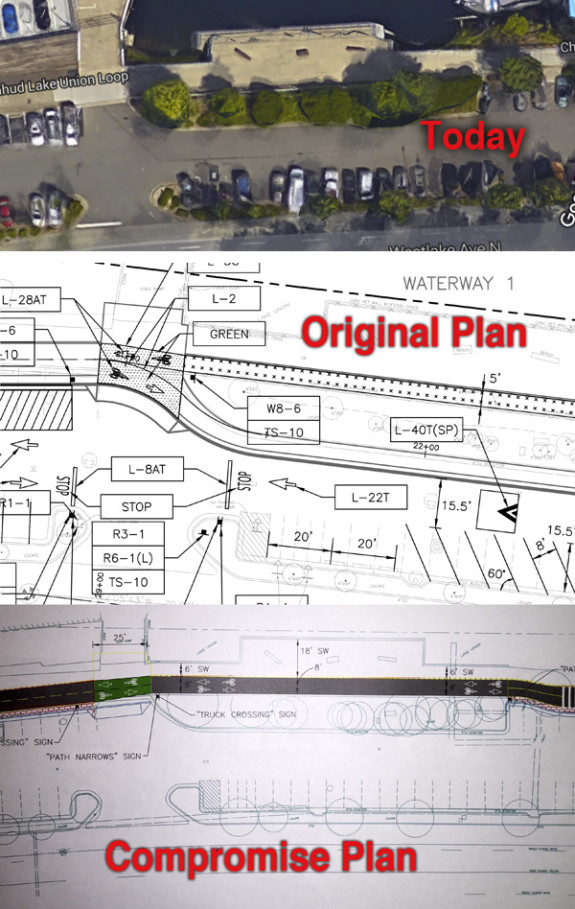 The joint press release announcing the deal includes the obligatory happy quotes from Nautical Landing’s Gordy Ruh, Cascade Bicycle Club’s Jeff Aken and SDOT Director Scott Kubly. And it’s true, it wasn’t easy to craft a solution that gets the bikeway built and avoids the courts. And it’s a very short stretch that will be so skinny. This agreement is cause for celebration all around.

But Seattle Bike Blog is totally independent, so I can say what I really think. I have no respect for Nautical Landing or the way the business carried itself through this process. While everyone else had to sit down at a table together and work things out, Nautical Landing behaved like a bully, flexed its bulging wallet and got its way. Their behavior was disgusting, frustrating and sadly predictable. They are basically just acting like cartoons of themselves.

I hate to say it, but letting these superyacht crybabies just have their six extra parking spots while the rest of us deal with a substandard bikeway is the most sensible way forward. Gotta swallow our pride, call Nautical Landing a bunch of names on this blog and move on to other bike route challenges in our city. Come next summer, this bikeway is going to be amazing. And if the problem is too bad, we can work for a fix then.

Hopefully, people are able to be careful and avoid colliding in this very skinny section. There’s certainly a chance that people get frustrated with the pinch point and just go back to biking the parking lot. There’s also a chance that people will spill over into the walking space, which will only be six feet wide. In the end, people biking and walking in this town are used to substandard facilities, and I bet people will make it work. There are busy sections of the Burke-Gilman Trail that are worse.

So feel free to vent below. But in the end, Mayor Murray deserves credit for keeping this out of the courts. Because the Ballard Missing Link still hasn’t broken ground more than a decade after the City Council voted to build it. We have to complete these major connections when we can, and we can’t let a short stretch of substandard bikeway derail the entire project.

Eastlake Ave, Rainier Ave, building out the Center City Bike Network and so many other projects still lie ahead. Westlake is good enough to celebrate.

With design work on the corridor’s improvements now finalized, the Seattle Department of Transportation (SDOT) will move forward with constructing the Westlake Cycle Track. The final design reduces conflicts between cars, bikes and pedestrians, while supporting mobility and economic vitality along Westlake Avenue North.

“With a better organized roadway for cars, bikes and pedestrians, this new link creates a flat, family friendly option for walking and biking between South Lake Union and Fremont,” said SDOT Director Scott Kubly. “The project supports safer trips for everyone who uses the corridor, especially pedestrians, while preserving 90 percent of the parking along Westlake Avenue North.”

An agreement reached with Westlake business Nautical Landing allows the Westlake Cycle Track project to move into construction. To minimize impacts to neighboring businesses, the cycle track will use the existing pedestrian bridge in the 2400 block of Westlake Avenue N to create a separated bike lane.

“We wish a lawsuit had not been necessary but, with the assistance of the Northwest Marine Trade Association, we were able to reach an agreement with the City that is better for business and bicyclists alike,” said Gordy Ruh of Nautical Landing.

The alignment, which was previously announced this summer, places the cycle track on the east side of the Westlake parking area adjacent to the sidewalk, and uses research based treatments to best address the corridor’s needs. It minimizes the number of vehicles crossing the cycle track, offers a scenic and intuitive route for people riding bikes, is distinct from the sidewalk and preserves 90 percent of the parking spaces.

“We are excited to see this project move forward, so people of all ages and abilities can comfortably bicycle to and from downtown,” said Jeff Aken, Cascade Bicycle Club regional planning director.

Groundbreaking on the project is anticipated to occur by January and the work is scheduled for completion by the summer. 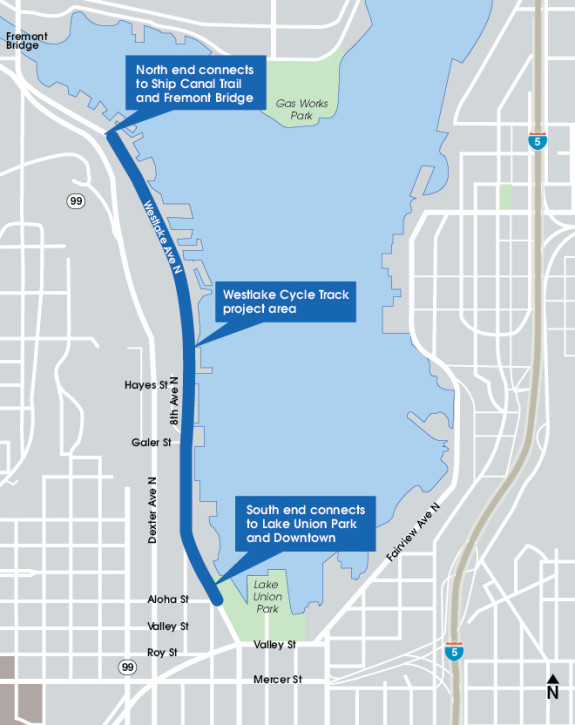 65 Responses to Westlake lawsuit is over, bikeway set to open in the summer