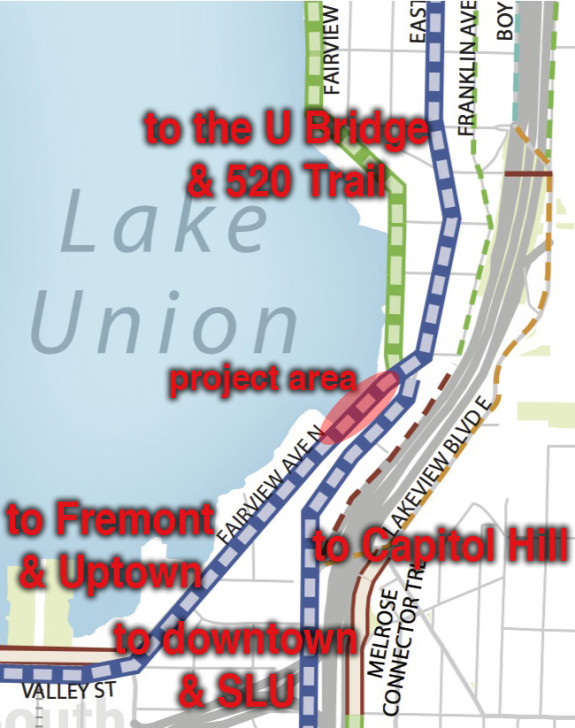 Base map: The Bicycle Master Plan.

The Fairview Ave N bridge is part of a major bike route hub, and major improvements and new connections on Westlake, Eastlake, 9th Ave N, Lakeview Blvd E and the 520 Bridge will only make it more important in the years ahead.

Now that Move Seattle has been approved (again, thank you Seattle voters!), the bridge replacement project is funded. If all goes according to plan, final design should be ready next summer and construction should begin in 2017.

You can learn more and have your say on the design at an open house 5:30 – 7:30 p.m. today (Tuesday) at the Cascade People’s Center (sorry for the late notice!).

This is the last timber-supported bridge in the city, a huge earthquake hazard that is past its useful life.

It is also where Brian Fairbrother died in 2011 after he apparently missed the turn onto the trail’s makeshift path and crashed on the stairs down to the floating walking path. The city has since installed barriers and signage to prevent a similar crash, but the larger problem remains: There is no properly-designed bike route to and across the bridge.

The initial design plans include a lot more space for separated bike lanes and sidewalks:

This is a fantastic start. Now we just need to make sure that the bridge is ready to connect all the bike routes noted in the Bike Master Plan. This opens a whole can of worms, but we gotta open it.

This means making some likely permanent decisions about the kinds of bike lanes we want on Fairview Ave N between South Lake Union and Eastlake (two-way on the north side or one-way lanes on each side? Or both?). We should also be ready to connect the new bike lanes on this bridge to both directions of Eastlake Ave, which means figuring out how that odd intersection is going to work and what the bike lanes on Eastlake are going to look like.

Because we need to get this bridge right the first time. It’s the single most expensive piece of this bike route hub, and it will be really hard to change later.

Design aside, replacing this bridge will also cause some serious detours. According to a project fact sheet (PDF), planners had originally hoped to keep the bridge open during construction. However, they now plan to close it entirely for 15 months. For people biking, this could mean a long, hilly detour, especially if you can’t or don’t want to shoulder your bike and take the stairs…