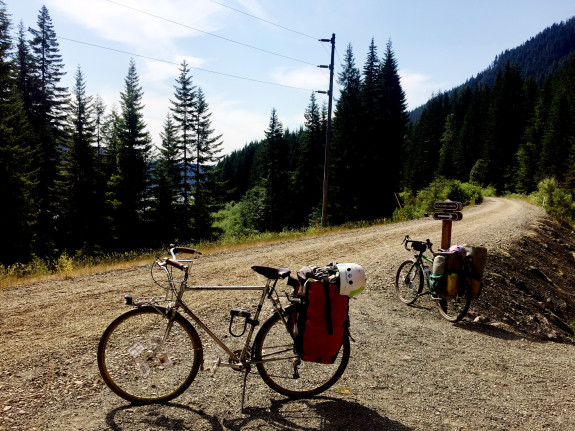 Washington State came one typo away from throwing away hope of ever completing the cross-state John Wayne Pioneer Trail and park (also known in Western Washington as Iron Horse State Park). If improved and connected, it would be the longest rail-trail in the nation.

Without any public outreach or hearing, two 9th District Representatives quietly inserted a last-minute provision in the state’s Capital Budget that they hoped would give away 130 miles of trail right-of-way to adjacent landowners. And because it was not its own bill, the idea never had to pass committee scrutiny or public input.

But this time people know about it, and communities across the state are outraged to learn how close the state came to throwing away this amazing and rare public resource. So far, the biggest trail support has come from within the 9th District, especially Tekoa where the trail ends in the east.

“Our state reps snuck this in the last minute in the darkness without any hearing or any attention for us to be able to know about it,” said Ted Blaszak, President of the Tekoa Trestle and Trail Association and member of the Tekoa City Council. “They abandoned their public service to actually represent their constituents and to inform them of the laws they are writing.

“Instead they did it behind our back and in secret. They betrayed us, and they betrayed the town of Tekoa,” he said.

Map of the currently more accessible sections of trail according to the Rails to Trails Conservancy.

Like many towns across the state, Tekoa hopes an improved trail could become a boon to their local economy. Blaszak said they were in the process of organizing a cross-state bike ride connecting Seattle to Tekoa when they learned their representatives tried to give the trail away.

“We don’t want the trail closed, we want the trail enhanced,” he said. The Tekoa Trail and Trestle Association has been working to restore a key trail trestle near the town and raised money to do their own surveying of the entire trail length to help them organize the ride.

Blaszak dreams of a day when people from Seattle will spend a few days biking across the state, visiting the towns along the way, then swing up to Spokane to take the train back.

As we reported over the summer, sections of the trail provide some of the most unique and incredible experiences you will ever have anywhere on the planet. The trail is well-developed from Rattlesnake Lake to Ellensburg, with restrooms, official campsites, water access (often streams, so bring a filter) and preserved bridge and tunnel connections.

But once you get east of the Columbia River, the traveling gets a lot harder (read this amazing blog post series for an idea of what it’s like to bike the whole thing). Lack of water, tough trail surface conditions and closed bridge trestles make some of it hard going.

But the answer isn’t to throw the whole thing away. The answer is to improve the trail so more Washington communities and visitors can use it.

“It’s an important part of our part of Washington’s heritage,” said Blaszak. “Why would we want for that to be our legacy, that we closed a park and a trail?”

Obviously, these ideas are not entirely thought-out, which is why our democracy is supposed to have public input and hearings and committee votes to make sure we aren’t making a terrible mistake.

Blaszak hopes that everyone writes their Representatives to make sure they know about this issue and that they know you oppose giving away trail land. In fact, you could even go a step further an ask for improvements to address the challenges along the trail and make it even better.

More details on the issue from the Tekoa Trail and Trestle Association:

The Tekoa Trail and Trestle Association applauds the Tekoa City Council for their unanimous passage of a City Resolution condemning the actions of their legislative representatives in Olympia Mary Dye and Joe Schmick (see attached).

We find their attempt to sneak through the legislature, a blatant land grab of a state park/trail for the benefit of private individuals, nothing less than public thievery.

To destroy and close forever the only cross-state park and trail system in Washington, which runs through the heart of their 9th district, is a betrayal of the interests of the citizens they were elected to represent.

In conversations with State Representatives Joe Schmick and Mary Dye they informed members of the City Tekoa government that they intend to introduce legislation to permanently close large sections of the John Wayne Trail/State Park.

The John Wayne Trail/State Park is a unique and beautiful cross state trail that allows folks to walk, bike, or ride their horses all the way from the Seattle area to the Idaho border in Tekoa, where it ends. The rail to trail park is closed to motorized vehicles.

The Dye/Schmick plan would give away the valuable Trail/Park land to those who own property abuts the trial at no cost to them. This is a land give away of a giant section of a state park that is approximately 135 miles long and 100’ wide.

Representatives Dye and Schmick have made no attempts to solicit or allow for any public comment regarding the matter. They have informed Tekoa that they are the driving force behind the legislation, that they enthusiastically support the closing of the trail, and there was little for anyone to do to stop the passage of their bill.

A similar law written, introduced and carried by Dye and Schmick in the final moments of the 2015 legislative session, was enacted with no debate and little notice. Trails would be closed now but for a typographical error that nullified it. They intend to correct that typographical error in the approaching session.

They cited three reasons to us for their motivation to close the trail forever:

The destruction of the Trail/Park would negatively impact the economies, social life, and identity of several communities along the trail in their district. Namely; Tekoa, Rosalia, Latah, Malden, Ralston, Lind, Othello, and many more.

We enjoy the use of the trail and feel the permanent loss of the only state wide trail in Washington would be detrimental to the not only to the current economies of communities all along the trail, but would forever end any opportunity for future economic development of what could become a vital job producer across the state.

We were particularly disappointed and shocked because Representatives Schmick and Dye have voiced their support for the refurbishing of the Tekoa Trestle, which is also part of the trail. We are concerned that our adamant opposition to the closing of the trail, upon hearing this shocking news, will put at risk the vital need our city has for the refurbishing of the Trestle, as Representative Schmick indicated might occur.

Rather than close the Trail/State Park, the state and region would be much better served by enhancing the trail to make it more user friendly and therefore encourage more regional tourism. There are several parts of the trail that could use some rock removal, more gravel, better water access, etc… we hope that this would be the direction the State of Washington would take our trail and not to its closure.
We also invite the general public to our “Emergency Town Meeting” scheduled for Monday Sept 21st 6pm at the Tekoa City Hall to discuss action steps to keep the trail open.