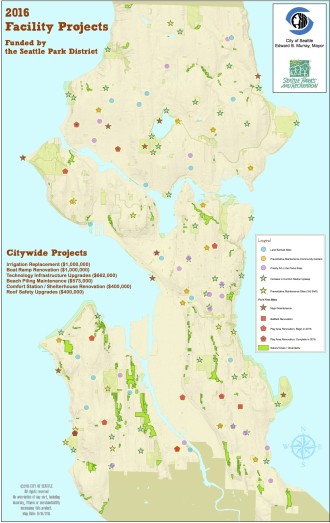 Map of the 2016 Parks District investments. Notice the red star on the north end of the Burke-Gilman Trail.

Seattle’s crumbing trails are finally set to get some love from the Parks District, according to an announcement from Mayor Ed Murray. Trails are just one small part of the city’s parks system that has fallen into disrepair due to years of deferred maintenance, Murray said while outlining $47 million in parks investments all across the city.

“Years of deferred maintenance and lack of major investment has taken its toll on Seattle Parks and Recreation facilities,” said Murray in a statement. “In 2016, we will launch a major round of improvements to community centers, open spaces and facilities across the system.”

The city is currently conducting a survey of trail conditions in part to guide $500,000 in maintenance investments budgeted for 2016.

And these fixes can’t come soon enough, especially for the city’s oldest trails. Some sections have not been paved since the late 70s or 80s, and the width of many older sections has gotten skinnier and skinnier as the edges fall away. For example, anyone who has biked on the Burke-Gilman Trail essentially anywhere north of the UW knows how jarring some of the bumps can be. And especially since so much of the trail does not have lighting, these bumps are especially dangerous during dark hours.

But wait, why is the Parks District in charge of maintaining such an important transportation facility as the Burke-Gilman Trail? That’s a great question. Many sections of trails in the city are technically parks while others are under the control of SDOT. You probably don’t even know when you cross from one to the other. But when it comes to budget decisions, funding needs to come from both departments. And when budget crunches happen, the Parks Department has higher priorities than trail conditions.

Should Parks be in charge of major transportation facilities at all? I suppose that’s a whole different conversation. 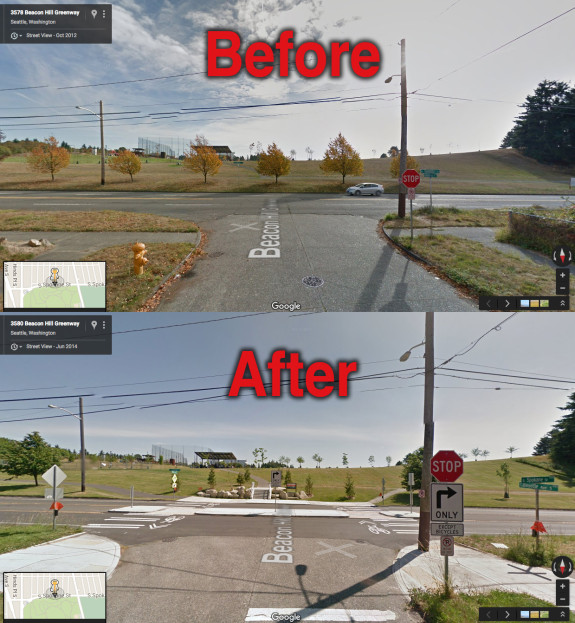 This amazing connection from the Beacon Hill neighborhood greenway to Jefferson Park should be a guiding light for neighborhood park access.

As we reported when we endorsed the Parks District vote last year, Seattle Neighborhood Greenways and other neighborhood leaders worked to make sure the new District was tasked with connecting parks and their surrounding neighborhoods. Too often, parks themselves are wonderful, but the streets bounding them are busy and have terrible walking and biking access.

One function for the city’s neighborhood greenways is to provide routes from homes to parks. With high quality and safe connections to parks, a good neighborhood greenway can almost feel like an extension of the parks itself. And in the same way, many paths and streets in parks work as biking and walking transportation connections. Nearly all of my favorite bike routes go through parks (including Denny Park, which is also budgeted for $909,000 in pathway and drainage improvements), and many more connections could be improved and expanded with some smart investments.

In other words, a holistic view of parks would see them as part of the surrounding neighborhood that don’t just stop at the legal border.

The mayor’s 2016 Parks District budget includes $319,000 to “collaborate with Seattle Department of Transportation (SDOT) to mark and activate greenways where they enter parks with signage, programming, seating for pedestrians, and other ideas.”

I can’t wait to see the improvements they come up with. Is there a poor park connection in your neighborhood? Let us know in the comments below how you think could SDOT and the Parks District could improve it.