Plans for the city’s most ambitious neighborhood greenway are getting close to completion, and they’re really something.

You can check them out and give the city feedback at an open house from 6–7 p.m. tonight at the Hillman City Collaboratory (map).

The plans are definitely not perfect, but this is also one of the biggest neighborhood greenway challenges in the whole city. Difficult geography and an incomplete street grid makes it very hard to create one direct and easy residential street bike route across the length of the Rainier Valley.

That’s why, even though this project is very exciting, it is in no way an alternative to safe and inviting bike lanes on Rainier Ave. Rainier follows a direct geographic valley through SE Seattle, making it by far the best and really only option for an easy, high quality bike route. That’s why residents like the folks at Rainier Valley Greenways are working so hard to push for protected bike lanes on Rainier, even going as far as installing several blocks of temporary bike lanes on the street last week for Park(ing) Day. 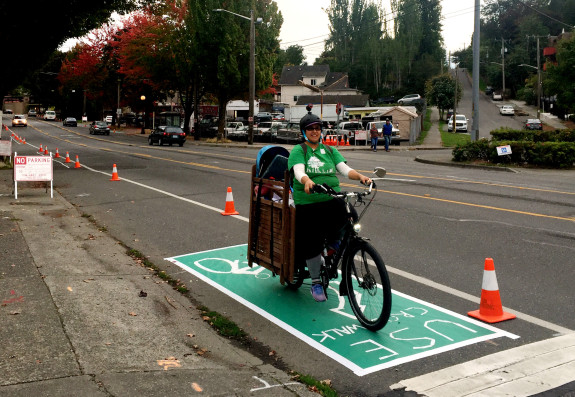 Neighborhood Greenways and protected bike lanes are not an either/or situation. We need both because they serve different functions. They complement each other, but too often people latch onto one at the expense of the other. It’s convenient politically, for example, to support neighborhood greenways as a way to avoid standing up for a needed-but-controversial bike lane.

But let’s take the planned neighborhood greenway for what it is: A way for people to get around safer and easier within their neighborhoods. I’m sure many people will use it as a through-route, but its best function will be for the people who live, work, play and go to school in Rainier Valley neighborhoods.

In fact, the whole plan is centered around schools and includes thoughtful school connections to make them extra useful for kids and high schoolers. Here’s the map of the city’s current plan: 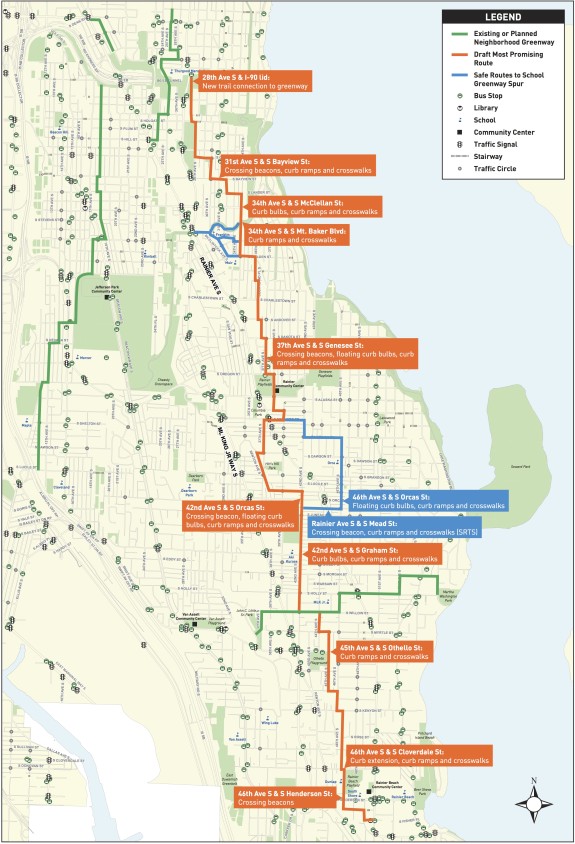 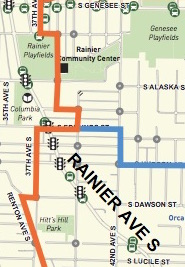 It looks kind of crazy with all those zigzags, but most those turns are necessary if you are going to stick to residential streets, avoid hills as best as possible and connect homes, schools, parks and business districts. So wayfinding is going to be extremely important for this route, more so than any other neighborhood greenway the city has built yet. For much of this route, one mistaken block out of the way could mean a very steep climb to get back on the greenway.

That said, some of the steeper hills in the plan might be avoidable. If you have any ideas, let the city know at the meeting tonight. And, of course, let us know in the comments below. I’m especially interested in your ideas for Columbia City, which has potential to be among the busiest sections if done right. But I’m worried the hills on their routing south of Alaska Street might significantly reduce use. 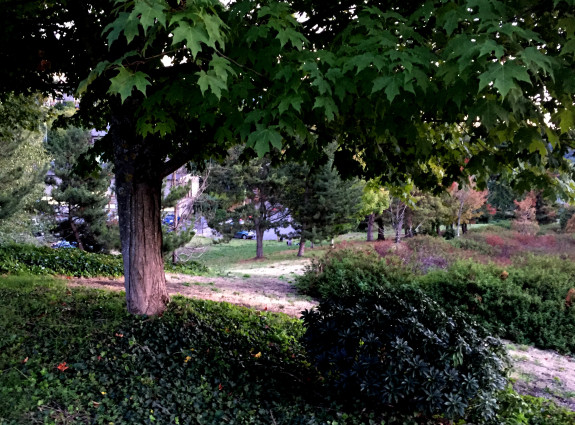 One of the coolest ideas in the plan is the new connection to the I-90 Trail. This was one of the more difficult puzzles in the whole route. All the other connections from the trail to the planned greenway route have ridiculously steep hills. But as you can see in the photo above, people who live in the area have already found the flattest option to the trail and the nearby Route 8 bus stop. I live in the Central District and bike through this area all the time, and I never noticed this people-made path connecting from MLK/I-90 Trail to 28th Ave S.

This informal path created by so many people walking and biking through the greenspace is what urban designers call a “desire line” or “cow path.” It’s the people doing the design work for you. All you have to do is look for these paths and make them official. And that’s exactly what the city and WSDOT plan to do (the park and I-90 Trail is state property).

Notice anything else you really like in the plan? Let us know in the comments below. And, of course, let the city know at the open house tonight or by emailing Adan Carrillo at [email protected].