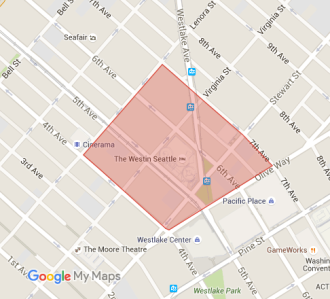 Biking is already the most reliable way to get around Seattle’s everyday traffic. But that will be especially true Tuesday through Thursday as Chinese President Xi Jinping stays at the Westin downtown.

Security measures will close a several-block radius around the hotel bounded by (but not including) Olive St., 7th Ave, Lenora St and 4th Ave to vehicles. However, those streets “will be significantly impacted by the security zone,” according to SDOT.

People can access the area on foot by passing through a security checkpoint. You can probably bring your bike through the checkpoint, but don’t expect to easily bike through.

But as we know from experience, any extended closure in one location can pretty much snarl all traffic during busy hours in Seattle. Our city’s transportation system is “fragile,” as SDOT Director Scott Kubly has put it in the past. Add in major closures due to President Xi’s caravan, and things could be a real mess for people not walking or biking.

And worse a lot of major bus routes will need to be detoured, which could undermine transit’s ability to carry a lot of the overload.

But if you already bike, why am I telling you this? This is one big reason people choose to bike downtown even without quality bike lanes: You can get around even when car and bus traffic grinds to a halt.

If you have been flirting with the idea of biking your downtown-bound trips (work, Sounders, whatever!), maybe this week is the week you give it a try. Or maybe you’ve been wanting to try Pronto. Or maybe you know someone who is interested and can offer to bike with them to show them the ropes. This is a good excuse.

You’ll also be helping the cause. The city and media outlets have been making a lot of noise about President Xi’s visit, telling people not to drive. It will be interesting to see if that attention pays off, and trips downtown are low enough to avoid any major problems. This has happened with major planned highway closures in the past.