Friday’s Park(ing) Day will be Seattle’s biggest yet: Over 50 pop-up parks planned 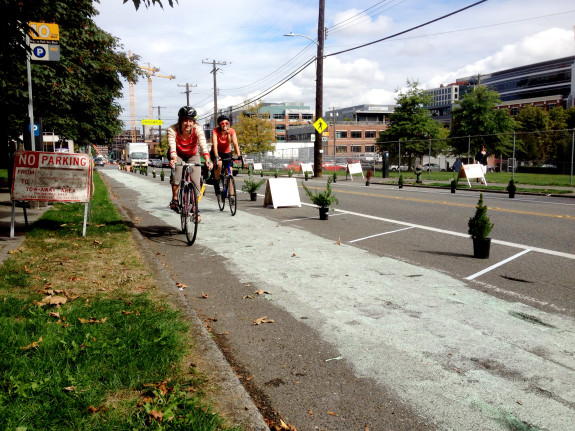 Last year, some parks got a little bigger and more ambitious, like this pop-up protected bike lane on 9th Ave in South Lake Union by Cascade Bicycle Club

Park(ing) Day is one of my favorite holidays. It’s a day of people and organizations showcasing their creative ideas for how to activate our public spaces. In the space of just a car or two, a whole park can spring up. That’s amazing.

Park(ing) Day 2015 is Friday, and there are more than 50 parks registered across Seattle. That makes this year’s event the biggest yet.

And better yet, the hours have been extended so people who work days or go to school don’t have to fake sick to check out the temporary parks. The parks will be open from 10 a.m. to 7 p.m.

You can read a short description of every park on the city’s Park(ing) Day website and check out the city’s map of park locations at the bottom of this post. 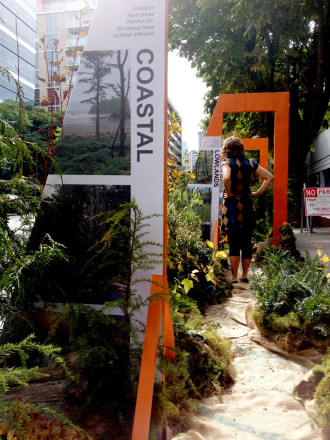 A walk through three WA State ecosystems from 2014.

Park(ing) Day is an international event. Started in San Francisco in 2005, the idea spread quickly. Seattle is one of the few cities that not only sanctions the day, but also actively organizes and supports it.

The event helped inspire the city to create a program to install permanent parklets around town. The success of parklets led to expanding the creative street use options available to businesses. For example, as of this year a restaurant can fund construction and pay street use fees to serve people sitting in “streateries” outside their front doors. The public space is more activated, businesses have more space to serve people and the city gets money. Outside business hours, the streatery becomes a parklet open to anyone. And it all happens in the space where one or two cars might have been parked.

This kicked off a new trend in Seattle Park(ing) Day experiments: Trying out new community-generated safe streets, walkability and bikeability ideas. And this year, Seattle Neighborhood Greenways and Cascade Bicycle Club organizers and volunteers are going all out.

The most ambitious project, requiring a ton of volunteers and planning, is a couple blocks of protected bike lanes on Rainier Ave in Columbia City:

Here's what going on for Rainier Ave from 39th Ave S to 42nd Ave S for #PARKingDayPlus. This is going to be AWESOME! pic.twitter.com/a6v87LuA8P

But the map is also packed with lots of exciting, more “traditional” park ideas. I put “traditional” in quotes because some of them are still pretty out there. Like Seattle Urban Farm Company’s planned “micro urban farm” in Ballard complete with crops, chickens and a free seed library.

Or maybe you would be more interested in a Georgetown urban forest or whatever the hell a “bubble garden” is in Pioneer Square.

A cardboard city in the U District “will be faced with prehistoric disasters hourly,” which a park in South Lake Union will create a “cellphone-free zone” on the sidewalk by funneling phone users into their park, where they can chill and use their phones on “task specific furniture.” Don’t ask me what any of that means. Just go check it out for yourself Friday.

Seriously, just reading through the descriptions on the city’s website is a lot fun. I highly suggest dropping what you’re doing and taking the time to read them all.

8 Responses to Friday’s Park(ing) Day will be Seattle’s biggest yet: Over 50 pop-up parks planned