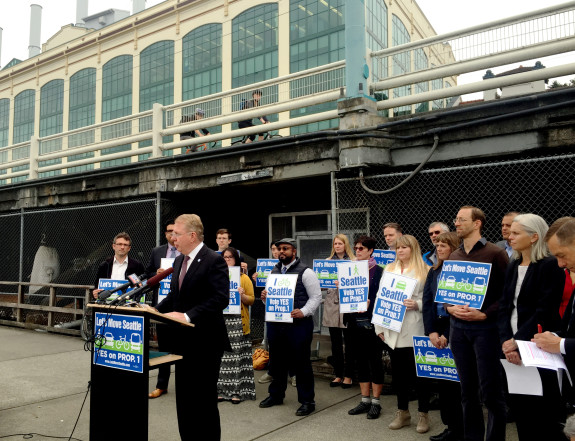 “Last year, the citizens of this city stepped up to fund the largest bus system expansion in history,” Mayor Ed Murray said to press, flanked by safe streets, business, labor and social justice leaders Tuesday. But putting more buses on our existing traffic-clogged and deteriorating roads isn’t enough. “We’re asking for this plan to make [all the recent transportation investments] work together.”

This was a theme throughout the presser: New Metro funding passed last year, the state transportation package passed this year and next year’s Sound Transit 3 vote all need to build on each other to create a multimodal transportation system our growing city needs. And Move Seattle is the cornerstone that makes it all work.

For example, more buses on the road is good, but Move Seattle gets those buses out of chronic traffic jams and creates seven new better-than-Rapid-Ride express transit routes.

The press conference marks the real start of campaign season. There is a kickoff party for the Let’s Move Seattle campaign tonight in Belltown (5–7 p.m. at the Spitfire, $50 suggested donation). And, of course, you can volunteer for the campaign.

“As we brought this out to people, they had lists that would make it much larger,” said Murray. “I think we got it about right.”

On top of new mobility and safety improvements Move Seattle also increases the basic and vital maintenance funding currently provided by the expiring Bridging the Gap Levy. That work is not optional. Roads will never fix themselves. The timber-supported Fairview Ave N bridge behind the mayor in the photo above is not going to make itself earthquake-ready.

And Ref Lindmark, a volunteer member of the Bridging the Gap Oversight Committee, said strong citizen oversight can make sure projects stay on budget and that promises made to voters are kept.

“[Oversight] gave us the assurance that if the city said it was going to do something, it would do it,” he said. And it worked really well.

“Projects came in on budget and on time throughout the whole levy,” he said. In fact, many major projects came in millions under budget. This allowed the city to pave many more miles of road than was promised (225 rather than 200) and build many more blocks of sidewalks (193 rather than 134).

In a town where state megaprojects like the downtown tunnel are famously spiraling out of control and over-budget, it’s important to remember that Move Seattle is full of more realistic, achievable and high-impact work. It’s not a fantasy magic bullet like Bertha, it’s about making streets all over the city work better.

And to be clear, “this is not about the seawall,” said Lindmark, referring to the city’s recent announcement that their part of the waterfront project has gone over-budget. Move Seattle does not include funds to bail out the seawall.

But the most inspiring speaker this morning was Rebecca Saldana, Executive Director of Puget Sound Sage.

“Our mission is to build communities where all families thrive, and that’s why we support move Seattle,” she said. “Our families need an efficient and reliable transit system that connects us to what matters.”

And that’s really the whole point of this levy. From a new light rail station at Graham Street in Rainier Valley to connected and safe walking and biking routes to buses that move around traffic jams rather than sit in them, the real result is a Seattle where everyone can get to the grocery store, to work, to a restaurant to meet friends and, most importantly, home to their families. 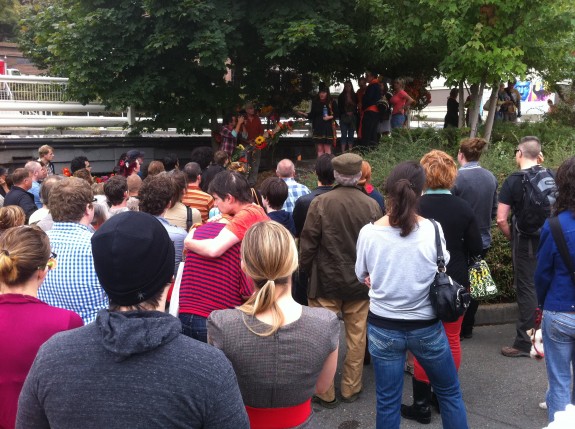 Though nobody mentioned Brian Fairbrother during the press conference, standing on that floating sidewalk reminded me of the memorial walk his friends held in the same spot just a few years earlier. One person who died on a bridge without a clear and safe bike route left an immense hole in an entire community.

One life senselessly lost impacted so many, and yet so many lives are ended or altered in traffic every year in Seattle. 150 in the past year, as we learned at the Vision Zero vigil in late August. That number is falling, but not fast enough.

The median homeowner will pay $12 more per month once Move Seattle goes into effect. It is worth every penny.