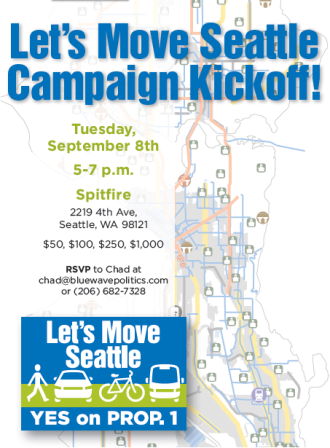 The 10 a.m. press event will be held next to the Fairview Ave timber-supported bridge connecting South Lake Union and Eastlake (unless you are on foot, you may not even realize you are going over a bridge). Move Seattle includes funding to replace the bridge, which is structurally deficient and in no way ready for a significant earthquake.

There will also be a campaign kickoff party and fundraiser at the Spitfire in Belltown (4th & Bell) early Tuesday evening. There’s a suggested donation of $50 (or more if you have it), but it’s a free event.

The mayor’s choice of the Fairview bridge is smart because it encompasses so many benefits the city will get from Move Seattle. It is one of the few ways to move from the city center to Eastlake and beyond, making it a vital road and transit structure.

It’s also a bridge that lacks proper walking space, though it does have a biking space shoehorned onto one side of it. People walking on the lake side must navigate stairs down to a dock at water level, which is difficult or impossible for people with mobility challenges.

But safe streets advocates may know the bridge better as the place where Brian Fairbrother crashed and died in 2011. Though we will never know for sure, he apparently missed an unmarked turn into the bike path on the bridge and crashed on the stairs. The city has since installed simple artsy barriers to prevent a similar mistake.

Fairbrother’s friends held an absolutely beautiful memorial for him shortly after he died, and his death was one of several that summer that sparked a renewed popular movement for safe streets and bike routes (it’s no coincidence 2011 is the year Seattle Neighborhood Greenways groups spread to neighborhoods all over the city).

Within days, someone went out and marked the turn after Fairbrother apparently missed it and crashed on the stairs ahead. 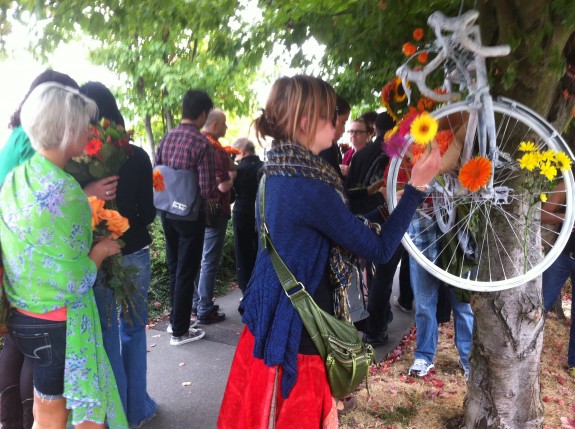 Friends of Brian Fairbrother held a beautiful memorial walk for him

The Fairview bridge is just one example of how Move Seattle will fund vital transportation fixes and maintenance while also improving mobility options for everyone, whether you are driving, walking, biking or taking transit.

The Seattle of tomorrow needs dynamic streets that carry more people and goods. But we are also no longer willing to accept rampant death and serious injury as a cost of getting around our city.

Brian Fairbrother deserved a bike route without this deadly hazard. So did so many others killed in preventable traffic crashes, whether a passenger in a car that got t-boned or a person struck while crossing the street to get to the bus.

Move Seattle includes funding to not only make our streets more efficient, but to make them safer, too. That means getting packed buses around chronic traffic jams and making crosswalks more prominent and safe. It means starting new express transit routes that are direct and frequent and providing connected and safe bike routes that many more Seattle residents and workers will find comfortable to use.

And of course, when the Big One (or even just a Significant One) hits, more vital connections will be open for emergency response and recovery.

But like any tax increase, there is opposition to the levy. So that’s why you should get involved with the campaign.

This is a big moment in Seattle history, a chance to put our money where our mouths are and create a truly safe and multimodal transportation system our growing city needs. Be a part of it.